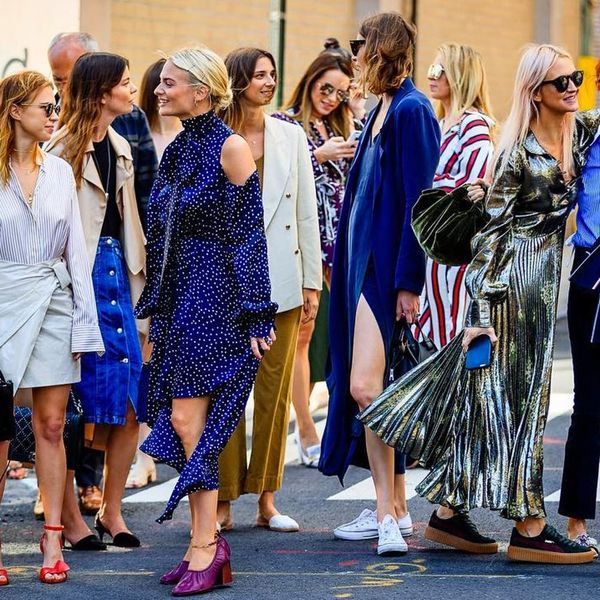 New York Fashion Week has officially come to a close, leaving in its wake enough fashion trends and style inspiration to keep us satiated until next season (or at least until next week when London and Milan kick into high gear). The runway itself served up more than its fair share of stunning ensembles (just take a peek at Delpozo or Proenza Schouler if you need clarification), and the streets of NYC didn’t disappoint either. From badass band tees to velvet shoes and twirl-worthy skirts, we’ve curated a list of need-to-know trends spotted on the industry’s biggest influencers. Scroll on for nine swoon-worthy fashion week street style looks.

1. Pleated Skirts: For every pair of elevated denim jeans spotted out on the streets (and trust us — there were a lot), there were at least two flirty midi skirts, with pleated varieties in particular dominating the scene. The twirl-worthy bottoms were the perfect response to the sweltering temps, especially when paired with cotton t-shirts and strappy tops.

3. Loafers + Mules: Despite the plethora of dressed-down duds and lazy-girl ensembles, industry insiders brought their style A-game with their footwear options. Among the expected ankle boots, strappy stilettos and block-heeled pumps were a crop of statement menswear-inspired loafers and embroidered mules that lent an air of elegance and refinement to jeans and slip dresses alike.

Velvet crush: Caroline Vreeland @carolinevreeland and Shea Marie @peaceloveshea both wore velvet, one of the top trends from the F/W 2016 runways, as soon as temperatures dropped below 80 degrees. Photo by @gastrochic #NYFW #fashion #streetstyle

4. Velvet: With velvet being one of fall’s biggest trends, the ultra soft fabric was bound to become a fashion week essential for the street-style elite. Velvet boots, blazers and more were out en force, lending each perfectly pulled-together ensemble an extra haute edge, thanks in part to its appearance in the Spring/Summer ’17 collections.

SKIRT SWITCH-UP: Make a statement in this season's must-have midi skirt silhouette as seen at #NYFW. Style maven @pernilleteisbaek pairs hers with #Balenciaga's oversized shirt for a boy-borrowed feel. Pair with pristine white leather point-toes and a bucket bag for a winning look 🏆 Keep up with today's shows as our #style ambassador #PernilleTeisbaek takes us front row @michaelkors #SS17, live on Insta-stories now 👆🏻 Search 768985 (@balenciaga shirt) and 755148 (@proenzaschouler bag) to shop at #NETAPORTER #SeeItBuyItLoveIt Photographed by @theurbanspotter at #NewYork #FashionWeek, exclusively for NET-A-PORTER.

5. Boldly Styled Button-Downs: Trimmed in ruffles or half-tucked into voluminous skirts allowing extra fabric to flounce with each step, button-downs — an undisputed closet workhorse — stepped in for fussier alternatives to achieve the ultimate balance of boy-meets-girl style. The result can only be described as flawless.

6. Wide Leg Trousers: When the It crowd wasn’t prancing about in pretty pleated skirts and fluid floral dresses, they were asserting their style know-how with billowy wide-leg trousers in classic neutral or high-octane hues. The clean lines and elegantly androgynous vibe is a look we think even Saint Laurent himself would totally get behind.

7. Low-Key Looks: Unapologetic denim seems like it would be the last thing to set the fashion week scene on fire, but the tried-and-true fabric was the go-to choice for off-duty models and It girls alike. Brazenly worn with band tees and chic ankle boots, cropped and flared styles both lived up to the expectations set by this caliber of event.

8. Statement Jackets: Okay, so outerwear may not have been 100% necessary, but a scene-stealing topper is always appreciated, and this season’s offerings were seriously swoon-worthy. Exhibit A: this sparkle-studded stunner right here. Bold color and intricate embroidery proved to be the best of the bunch, with more traditional yet voluminous styles coming in at a close second.

9. Slip Dresses: It seemed like everyone was looking to recycle their slinky slip dress for the shows, ushering the boudoir beauties into fall with sweeping duster coats and perfectly polished collared shirts. The move felt flawlessly effortless, especially when teamed with unfussy steppers, like block-heeled ankle boots and high-top sneakers.

Libby MacCarthy
Libby MacCarthy is an urban planner turned writer with a love (bordering on unhealthy obsession) of all things fashion and beauty related. She lives for perfectly brewed coffee, farmer's markets, dinner parties and perusing impeccably designed boutiques. When she's not on the hunt for the latest trends, you'll likely find her plotting her next adventure or nose deep in a book. Libby currently splits her time between the East Coast and her adopted home of France. Follow her daily adventures on Instagram.
Fashion Week
Trends and Inspo
Fashion Week New York Fashion Week Street Style
More From Trends and Inspo