Bobbi Brown Says This Makeup Trend Will Be Huge for Fall 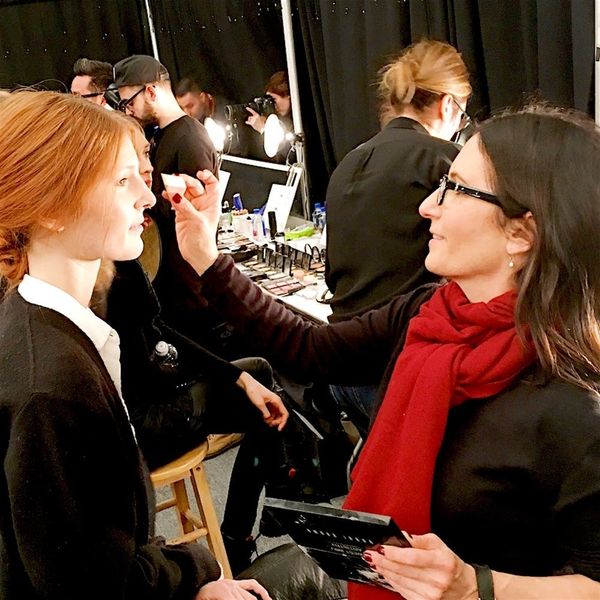 We stopped by backstage at the Marchesa show for New York Fashion Week Fall/Winter 2016 and got the scoop on the makeup look that celebrity MUA Bobbi Brown and Marchesa designers, Georgina Chapman and Keren Craig, came up with. Bobbi also shared with us what she believes is the BIG makeup trend that you’re about to see everywhere come fall.

All the components — the hair, makeup and nails — were inspired by 19th century American painter John Singer Sargent’s romantic portraits. Therefore, simplicity is key and it all starts with the skin, of course. “Very, very beautiful, very soft face and very silky skin,” Bobbi told us. “The effect is going to be retouching pencils and retouching powders and a cherry stained lip. We wanted the girls to look flawless. Retouching powders create a little bit of a romantic feel and [are] very silky, and they’re called retouching because your skin looks like you’ve been retouched after you use it.”

The idea for this 1800s beauty look with a modern twist actually originated with the Marchesa designers, but Bobbi thinks that they were onto something. When we asked if she saw this look for skin being big for fall, she responded emphatically, “I do, and what I love about it is it’s not thick — it’s not even sheer. It just looks like it’s been almost painted on. I was never a fan of airbrushed makeup but that’s the look I think they were going for.” Bobbi was using her Retouching Face Pencil ($32) and Retouching Powder ($38) for the backstage look. As for the lips, to keep it all turn-of-the-century glam, she was applying the lip color with just her fingers. “The lip color varies on each girl because every girl has a different color lip, but it’s a kind of cherry stain,” she told us as she worked. As for the eyes, no liner here! Bobbi finished the glam with a few brushes of mascara and some white shadow on the lower lid.

Natural was also the name of the game when it came to the nails, according to Zoya’s nail lead Naomi Gonzalez. In fact, Marchesa chose to forgo any color whatsoever. Instead, they opted for just two coats of the Pink Perfecter ($10) and a layer of Glossy Seal ($12) from Zoya’s Naked Manicure System ($96). “Simple, chic, short nails. Very clean, meticulous manicure,” Naomi told us. “I call [this look] a tall glass of water because it’s very refreshing compared to everything that’s out there right now.”

And this is the look you’re going to want to top off the dreamiest fall beauty look of all time. “The hair has to have a simple vibe with the right amount of sophistication,” Antonia Corral Calero, MorrocanOil’s Global Creative Ambassador, tells us. He created two looks for the show — one being a simple twisted chignon and the other a more complicated being “basket weave” bun that’s pulled low and full at the nape of the neck.

“It has a little macrame feel to it,” Antonio says, “but I will not tell you step-by-step because I don’t even know. My hands speak to me.”

Will you be trying out this fall trend? Tweet us @BritandCo!

Kimberly Wang
Kimberly Wang writes about all things pop culture, tech, style, and beauty. She's a Bay Area transplant and has an MFA in Creative Writing from Columbia University. On a sunny New York day, you can find her hanging out with her mini schnauzer Isabelle Jellybean on a blanket in Central Park.
NYFW
Beauty News
NYFW
More From Beauty News