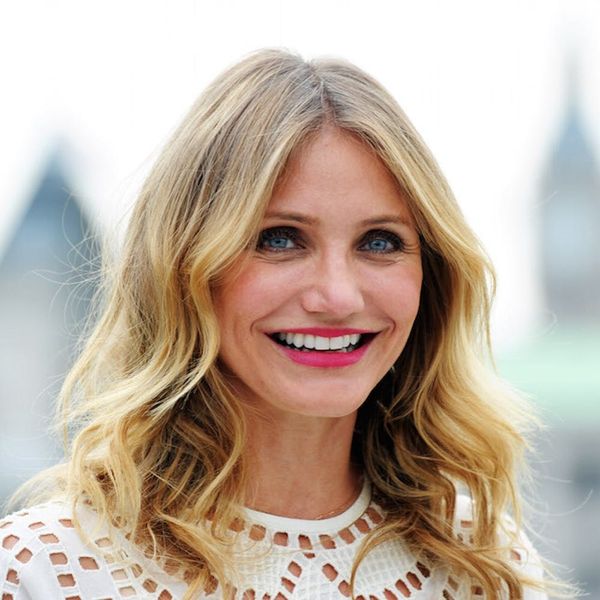 1. Straight up, the only thing better than pictures of inside celebrities’ homes is pictures of them with no makeup. Cameron Diaz, promoting her new book about breaking aging taboos and taking care of yourself to age healthily from the inside instead of slathering creams on your face, Instagrammed a pic of a fully natural face, and she looks — and says something — beautiful. “Let’s start celebrating and living an engaged life, and stop punishing ourselves for not looking a certain way, and instead holding ourselves accountable for actually taking care of ourselves inside first,” she wrote on her blog. If your tendency is to sneer at a celeb’s privileged position, it’s worth noting that Cameron is aware of that here. “Of course we all live with different circumstances that can make it difficult to make our well being a priority,” she admits. If the goal of this ‘Gram was to sell a book, well, consider us intrigued! (via @camerondiaz)

2. Whoopi Goldberg is blessing the world with medical marijuana for period cramps. The new company, Maya & Whoopi, will feature edibles, liquids, topical formulas and a THC-infused bath soak that it describes as “profoundly relaxing,” all designed to offer relief from the sometimes debilitating pain periods can cause. Whoopi says her grown granddaughters both suffer from extreme menstrual cramps and acted as the inspiration for her. “For me, I feel like if you don’t want to get high high, this is a product specifically just to get rid of discomfort,” she says. “Smoking a joint is fine, but most people can’t smoke a joint and go to work. This, you can put it in your purse. You can put the rub on your lower stomach and lower back at work, and then when you get home you can get in the tub for a soak or make tea, and it allows you to continue to work throughout the day.” The line will be available in April, but for now, will only be available in California. (h/t Vanity Fair, photo via Vivien Killilea/Getty)

3. The Rihanna meme costume that got this fan backstage at a concert is EVERYTHING. Have you ever wondered about the little squiggly cartoon drawing that Rihanna uses as her Instagram profile pic? Her name is Rhenna, and it’s a meme that has made its way around the Internet, even showing up in Ri’s own posted pics sometimes. One fan made a light-up mask of the drawing and wore it, along with a recreation of Ri’s 2015 Grammys dress, to a concert, ultimately ending up backstage at the show to meet Rihanna. Shut it down, everyone. This is as good as it gets. (h/t MTV News)

4. This Canadian town’s summer camp offers sports for boys and manicures for girls. Yikes. Just a suuuuuuper quick reminder, we’re in the year 2016, and yet a summer camp ad from Toronto suburb Richmond Hill, Ontario, offers separate boys and girls camps with very different activities. The “Girlz Rock” camp says girl-friendly fun includes mani-pedis, scrapbooking, as well as cooking and baking. The “Boyz Rule” camp, however, offers its male campers strictly sportz. After a lot of complaints, the town says it’s reviewing the programs. (via Twitter)

5. This dog cafe might just pair you with your new rescue pup! Silver Lake, California, will get the country’s very first official rescue dog cafe. Called simply The Dog Cafe, the new space will open on April 7 and will work with local shelters to bring the dogs in on a rotating basis. The cafe ran a successful crowdfunding campaign to get funded, and they promise to revolutionize dog adoption. (via Facebook)