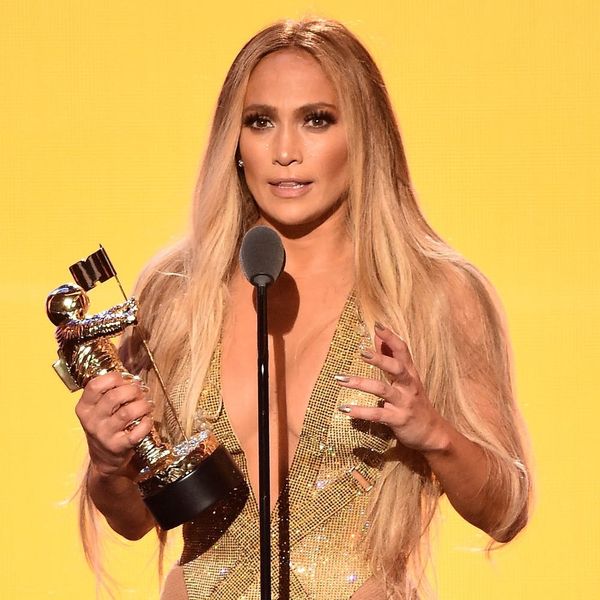 Jennifer Lopez had a big night at the 2018 MTV VMAs. After bringing down the house with a show-stopping medley of her greatest hits — complete with multiple wardrobe changes — she made history as the first Latinx artist to receive the Michael Jackson Video Vanguard Award.

J.Lo took the stage about halfway through the ceremony, opening with a few lines from “Waiting for Tonight” before launching into other hits including “Ain’t It Funny,” “Love Don’t Cost a Thing,” “I’m Real,” and “Jenny from the Block,” with DJ Khaled and Ja Rule hopping on stage for a pair of stellar duets.

When she finished, Shawn Mendes stepped up to present her with the Video Vanguard Award, which she accepted with a speech that paid tribute to both her fans and her family. “I grew up on MTV and this is really, like, a tremendous honor for me,” she said. “It has been an incredible journey of dreaming my wildest dreams and then kind of watching them come true. Music, acting, performing, this career has always been an obsession for me. … I kind of had to forge my own path, make my own rules. I was obsessed like that, and I liked it that way for a while, just working and working and working.”

That changed when she had her kids, twins Emme and Max, who were there in the audience to cheer on their mom. “I knew I had to be better. I knew I had to go higher, I knew I had to be stronger than I had before. … So thank you, Max and Emme, there is so much more to do and I know in my heart that the future is even brighter than anything I could have accomplished up to now because of you.”

She went on to thank her team and her family, including her mother Lupe (who was also in the audience), her father David, and her sisters Linda and Leslie, who have helped her stay focused over the past 20 years.

She also had a message for her boyfriend, former baseball star Alex Rodriguez, who was sitting with her mom and her kids. “You’re like my twin soul. We’re like mirror images of each other,” she told him. “My life is sweeter and better with you in it because you make me realize that every day the sky is not the limit. The universe is infinite and so is what we can accomplish together with love and trust and understanding. There is so much more to do, to experience, and there is no one I would rather do it with, baby.”

She finished by addressing her fans, saying, “Loyalty is everything to me. Thank you. I love you!”

What did you think about Jennifer Lopez’s MTV VMAs Video Vanguard Award speech? Tweet us @BritandCo.

Desiree O
Desirée O is a ‘Professional Bohemian’ who loves anything and everything related to the arts, entertainment, and pop culture. She ADORES being a ‘Newsy’ for Brit + Co, covering all of the latest tidbits of awesomeness that you want to read about. When she’s not writing, she’s either making messy art, going on long adventurous walks with her camera, or poking around over at bohemianizm (http://www.bohemianizm.com/). You can find out about Desirée O and her work at http://DesireeO.com/ or follow her on Twitter @DesireeO.
Awards Shows
Music
Awards Shows VMAs