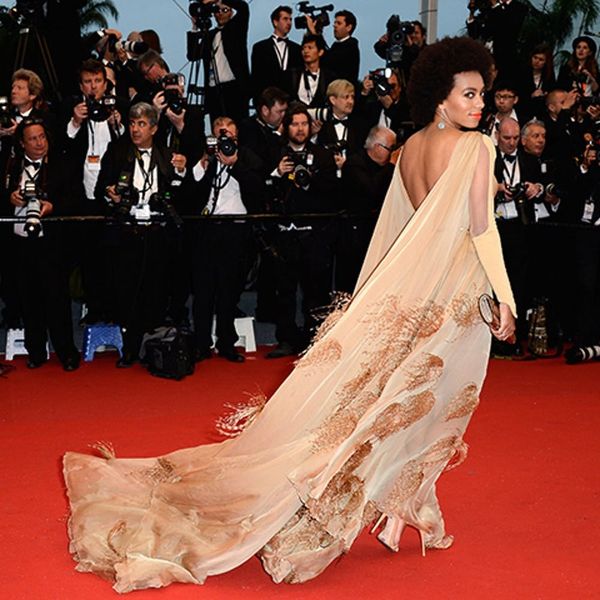 There’s no denying it: The Cannes Film Festival is one our favorite events of the year. The prestigious festival might be famous for showcasing the most noteworthy new films from every corner of the globe, but it’s the star-studded guest list and parade of jaw-dropping gowns that really have us hooked. Every year, it seems like the fashion gets better and better, with a few adventurous ladies going out on a limb to fuse modern trends with the old Hollywood glamour that we love. While Cannes only comes around once per year, you can revisit your favorite styles with a look at some of our favorite gowns to ever grace the esteemed red carpet.

1. Blake Lively: All those years as It girl Serena van der Woodsen certainly paid off, because Blake Lively reigned supreme at last year’s festival, stepping out in multiple show-stopping gowns. Gucci Première was her designer of choice for both the Grace of Monaco and Captives premieres, and it’s not hard to see why. Not only do the designs fit her like a glove, but they also exude elegance and glamor. (Photos via Pascal Le Segretain, Sebastian Nogier/Getty)

2. Diane Kruger: Dressing for the red carpet is a cake walk for Diane Kruger. No matter what she wears — whether it be a Christian Dior ballgown (2012) or a sultry Calvin Klein sheath (2011) — it always translates as effortless and incredibly chic. (Photos via Vittorio Zunino, Andreas Rentz, Pascal Le Segretain/Getty)

3. Liya Kebede: Liya redefined Cannes glamour rocking this Proenza Schouler stunner out on the 2015 Cannes red carpet. Unexpected and modern, the textured work of art was a refreshing alternative to the ball gowns and flowy frocks typically on show. (Photo via Pascal Le Segretain/Getty)

4. Uma Thurman: While more muted tones seem to be a favorite on the Cannes red carpet, Uma Thurman’s decision to don a canary yellow Atelier Versace gown at last year’s festival was spot on. (Photo via Pascal Le Segretain/Getty)

5. Lupita Nyong’o: Lupita totally worked this look at the premiere of La Tete Haute at the 2015 festival. We loved the playful show the actress put on for the paparazzi, twirling the pleated skirt of her gorgeous emerald Gucci gown all the way to the theater’s entrance. (Photo via Danny E. Martindale/Getty)

6. Nicole Kidman: Nicole Kidman is another one of our favorite ladies to watch on the red carpet. At both the 2013 and 2014 festivals, she knocked it out of the park with a lacy Valentino number and an intricately embellished Armani creation. (Photos via Stuart C. Wilson, Pascal Le Segretain/Getty)

7. Penelope Cruz: Spanish actress Penelope Cruz could strut down the red carpet in a paper bag and still look great, but this dreamy Marchesa frock that she wore for the Pirates of the Caribbean: On Stranger Tides premiere back in 2009 is more fitting for a queen of the silver screen. (Photo via Andreas Rentz/Getty)

8. Marion Cotillard: As a design muse for Dior, it’s no surprise that Cotillard has owned the Cannes red carpet in 2015. And rightly so — it is her home turf, after all. (Photos via Pascal Le Segretain/Getty)

9. Natalie Portman: Sometimes less is more, and that was certainly true for Natalie Portman this year. Appearing at the festival to debut her first directorial venture, A Tale of Love and Darkness, she put together an arsenal of understated yet undeniably exquisite gowns. This red-hot Christian Dior Couture number was certainly a showstopper, but we were equally as smitten with her simple Lanvin gem too. (Photo via Pascal Le Segretain/Getty)

10. Solange Knowles: Oh Solange, when don’t you get it right? Before she debuted the most covetable wedding wardrobe ever, she rocked this airy Stéphane Rolland gown at the 2013 premiere of The Great Gatsby. While at first glance it might appear a little conservative by Solange standards, a closer look reveals a sexy plunge body suit beneath a semi-sheer layer of caramel-colored fabric. (Photo via Ian Gavan/Getty)

11. Fan Bingbing: If you didn’t catch her in X-Men: Days of Future Past, Fan Bingbing’s name might not ring a bell, but chances are you’ve spotted her out on the red carpet. A fixture at Cannes for the last few years, Fan’s festival wardrobe is full of sophisticated, ladylike ensembles and eye-catching patterned frocks. (Photos via Pascal Le Segretain, Sean Gallup, Andreas Rentz/Getty)

12. Emma Watson: There isn’t much not to love about Emma Watson — including her impeccable sense of style. For the showing of The Bling Ring in 2013, the actress and Goodwill Ambassador for the UN opted for a simple and sophisticated Chanel Couture sheath stunner. (Photo via Gareth Cattermole/Getty)

13. Cate Blanchett: A bodice marked by sequin scales was a fitting choice for the How to Train Your Dragon 2 premiere at Cannes in 2014. The bright colors and unexpected textures of the Givenchy dress did more than just speak to the film’s theme. This frock also provided a refreshing break from the classic styles that dominate the Cannes red carpet. (Photo via Pascal Le Segretain/Getty)

14. Jessica Biel: This over-the-top Marchesa design was definitely a risk, but Biel managed to pull it off beautifully at the Inside Llewyn Davis premiere in 2013. (Photo via Vittorio Zunino/Getty)

15. Angelina Jolie: Jolie went all silver screen siren in a nude Versace gown with light, flowing panels in 2009. While the dress was gorgeous, it was her dramatic red lips that really stole the show. (The arm candy wasn’t bad either.) (Photo via Pascal Le Segretain/Getty)

16. Julianne Moore: Who ever thought gunmetal could be so glamorous? Moore’s Armani Privé dress and feathery kimono at Cannes 2015 felt sleek and modern, but still managed to capture some of that old world elegance that we associate with film’s most noteworthy fete. (Photo via Neilson Barnard/Getty)

Who wore your favorite Cannes Film Festival gown of all time? Tell us in the comments!

Libby MacCarthy
Libby MacCarthy is an urban planner turned writer with a love (bordering on unhealthy obsession) of all things fashion and beauty related. She lives for perfectly brewed coffee, farmer's markets, dinner parties and perusing impeccably designed boutiques. When she's not on the hunt for the latest trends, you'll likely find her plotting her next adventure or nose deep in a book. Libby currently splits her time between the East Coast and her adopted home of France. Follow her daily adventures on Instagram.
Blake Lively
TV
Blake Lively Celebrity Style Lupita Nyong'o Red Carpet
More From TV