The 25 Most Memorable Princess Moments in Red Carpet History 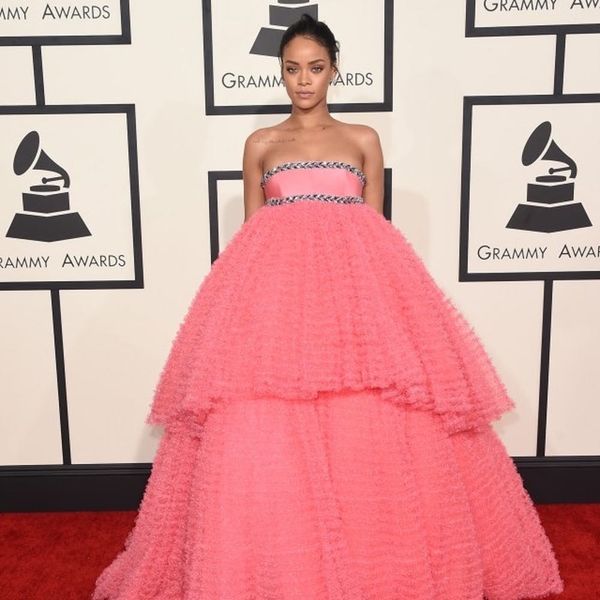 The red carpet is the place where countless fashion statements and memories are made. It’s also the place where icons and iconic dresses become one. Sure, there are endless types of red carpet gowns that take our breath away during every award season, but there is something extra special about those that flaunt a flowy princess style. They’re romantic, fanciful and beautiful showstoppers that win every single time. Take a look below for some of the most beautiful princess dresses to ever grace the red carpet. Get ready to drop your jaw in 3… 2… 1… !

1. Rihanna: Ever the trendsetter, Rihanna had one of the most memorable princess dress moments in recent memory when she showed up to the 2015 Grammy Awards wearing this puffy and pink tiered Giambattista Valli gown. (Photo via Jason Merritt/Getty)

2. Lily James: Our favorite new Cinderella made quite the splash on the red carpet in this regal and oh-so-elegant Elie Saab gown. (Photo via Jason Kempin/Getty)

3. Zooey Deschanel: If you’re a fan of New Girl, then you know and appreciate that Zooey loves a beautiful dress. She took things up several notches when she made jaws drop while wearing this princess-worthy Reem Acra gown. (Photo via Frederick M. Brown/Getty)

4. Lupita Nyong’o: Hollywood’s newest It girl (and our imaginary BFF) made her Oscar red carpet debut in 2014 and firmly cemented her fashion-icon status. Her powder blue Prada gown is the stuff fashion dreams are made of. (Photo via Jason Merritt/Getty)

5. Carrie Underwood: This gal is constantly challenging the fashion expectations of what a country star should look like, and we aren’t mad about it. She made one bold and beautiful statement in this breathtaking, tutu-inspired Oscar de la Renta gown. (Photo via Frazer Harrison/Getty)

6. Sarah Jessica Parker: She’s such a fashion icon that it really doesn’t even need to be discussed at this point. Nevertheless, SJP added to her long list of legendary red carpet moments with this stunning princess-like Dior Haute Couture gown. (Photo via Kevork Djansezian/Getty)

7. Anne Hathaway: Looking like a living golden statuette, Anne Hathaway was princess-perfect at the 2010 Met Ball in this lovely Valentino gown. (Photo via Stephen Lovekin/Getty)

8. Amy Adams: An ethereal princess is probably the best way to describe how Amy looked in her Oscar de la Renta gown at the 2013 Academy Awards. (Photo via Jason Merritt/Getty)

9. Olivia Wilde: The title of “pretty pastel princess” easily goes to Olivia Wilde for this lavender Reem Acra gown. With the contrasting textures and gorgeous hue, this dress is an absolute stunner. (Photo via Frazer Harrison/Getty)

10. Jennifer Lopez: Rivaling the shine from the actual award’s statues, Jennifer Lopez was the brightest star at the Oscars in this Elie Saab gown. (Photo via Jason Merritt/Getty)

11. Taylor Swift: If there is one way to easily make a statement on the red carpet, it’s to wear a bold red dress. Tay Tay definitely got the memo, but she amped things up to princess level in this Elie Saab gown. (Photo via Michael Loccisano/Getty)

12. Penelope Cruz: Classic and the embodiment of a sophisticated princess, Penelope Cruz was pure elegance in this Armani Privé number. (Photo via Michael Buckner/Getty)

13. Jennifer Lawrence: Don’t worry, JLaw, we don’t just remember that graceful trip on the stairs at the 2013 Oscars! This pouffy gown had us practically drooling over its elegant trumpet silhouette and subtly textured fabric. (Photo via Jason Merritt/Getty)

14. Gwyneth Paltrow: This pretty-in-pink gown is the stuff that red carpet dreams are made of. After she flaunted this princess-y Ralph Lauren number, Gwyneth Paltrow became a certified style icon. (Photo via Getty Images/Getty)

17. Julianne Hough: Julianne totally shocked attendees and viewers at home when she wore this unexpected but fabulous dress. Monique Lhuillier does it agian! (Photo via Jason Merritt/Getty)

18. Kate Beckinsale: “Pretty in blue” is one way to describe how lovely Kate Beckinsale looked while wearing this princess-perfect, tulle-laden Marchesa gown. (Photo via Michael Buckner/Getty)

19. Kate Middleton: She’s already royalty, so it’s only natural that Kate Middleton should end up on this list. The Alexander McQueen gown that she wore to the 2011 BAFTA Awards showed a more modern and chic take on that pretty princess style. (Photo via Pool and Matt Baron/Getty)

20. Diane Kruger: Our fave style maven, Diane Kruger, knows how to mix things up in the fashion department. And this gorgeous, one-shoulder Giambattista Valli gown definitely did just that. (Photo via Pascal Le Segretain/Getty)

24. Hailee Steinfeld: Looking both age-appropriate and princess-worthy, young Hailee Steinfeld (aka Juliet) was a lovely vision of beauty in this Marchesa dress. (Photo via John Shearer/Getty)

25. Emma Watson: Proving that she is all grown up, Emma Watson attended the 2011 premiere of Harry Potter and the Deathly Hallows Part 2 wearing this pretty princess-like gown by Oscar de la Renta. (Photo via Ian Gavan/Getty)

Do you have any favorite or memorable princess dresses from the red carpet? Let us know in the comments below!