Emma Watson Is About to Make Our Childhood Dreams Come True 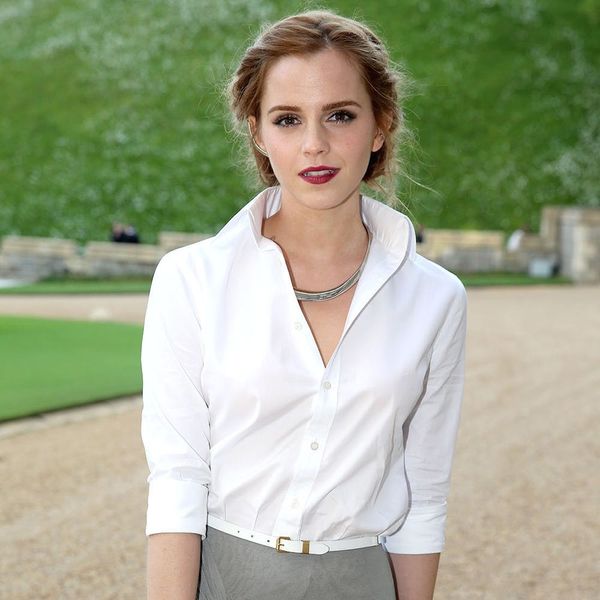 It’s been four years since Emma Watson took to the big screen to brilliantly portray our favorite magical heroine, Miss Hermione Granger. Since her departure from Hogwarts, the actress has been steering very clear of DUIs and stints in rehab. Instead she went ahead and earned a degree from Brown University and became the UN Women Goodwill Ambassador. She has been popping up in some pretty stellar Hollywood films over the past few years (like The Bling Ring and The Perks of Being a Wallflower), but the role we’re most excited to see her play was just announced today.

Watson took to her Facebook page this morning to share news that she’ll be starring as Belle in a live-action version of Disney’s Beauty and the Beast. She writes, “I’m finally able to tell you… that I will be playing Belle in Disney’s new live-action Beauty and the Beast! It was such a big part of my growing up, it almost feels surreal that I’ll get to dance to ‘Be Our Guest’ and sing ‘Something There.’ My six year old self is on the ceiling — heart bursting. Time to start some singing lessons. I can’t wait for you to see it.”

Details surrounding the film and who is slated to play her furry counterpart are minimal, but what we do know is production is tentatively set to start later this year and it will be directed by Twilight: Breaking Dawn director, Bill Condon. If this turns out anything like the other live-action versions of the classics we’ve been seeing lately – like last year’s Maleficent or this year’s Cinderella (set to be premiere March 13) — it seems like we’re in for a real treat.

All this chat about starlets being transformed into Disney characters has our brains swirling with ideas of who else we’d like to see made into a real life princess. Attention Disney casting agents, if you’re listening here are our suggestions.

1. Elle Fanning as Rapunzel: With gorgeous, blonde hair and perfectly pale skin, the budding actress was born for this role.

2. Rose Leslie as Merida: We fell in love with Rose after her portrayal of the spunky and strong headed, Ygritte on HBO’s Game of Thrones. Considering she’s a natural redhead, from Scotland and can play the tomboy part to a tee, she’s pretty much a perfect fit.

3. Jennifer Hudson as Tiana: Back in 2013 Annie Leboitz portrayed Hudson as the New Orleans dwelling princess, Tiana in a photo series titled “Disney Dream Portraits.” Ever since we spotted Hudson in that green and yellow dress we can’t stop thinking about how epic a feature-length film would be with her as the star. I mean, with those vocal chops? Done and done.

4. Brenda Song as Mulan: Spunky and fearless, Song is no stranger to playing parts with a whole lot of wit. We’d love to see her clumsily training for battle in an epic live-action version of this touching tale.

Who would you cast in a live-action version of your favorite Disney flick? Share your thoughts with us in the comments below.

Cortney Clift
Cortney is the senior writer and special projects editor at Brit + Co. She typically covers topics related to women's issues, politics, and lifestyle. When she's not buried behind her computer you'll find her exploring New York City or planning her next big adventure.
Disney
Home News
Disney