Beauty Mythbuster: Which of These 3 Eyeliner Hacks REALLY Works? 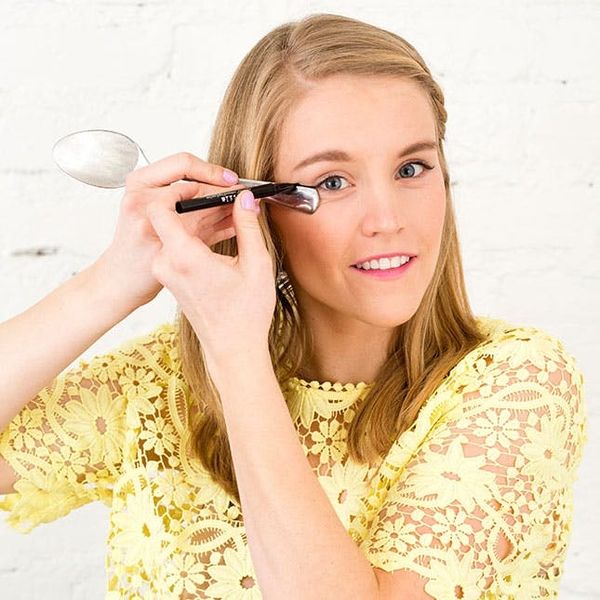 Okay ladies, let’s talk eyeliner, even though it can be a touchy subject. You see, I have clients who’ve told me that they avoid it altogether because they just can’t seem to get it right, especially when it comes to drawing on a cat eye. True, it’s one of the more elusive ways to line your eyes, but it turns out you don’t need surgeon-like precision to get the look. We’ve read about ways to hack the retro style using unconventional tools to cheat your way to “the perfect cat eye,” but do any of them really take the place of patience and practice (or your local makeup artist like me? ;) We had our Creative Coordinator Maddie put the top eyeliner hacks on the web to the ultimate Beauty Mythbuster test. Scroll through to see how it went using a spoon, a business card and scotch tape as a stencil.

You’ve seen it all over Pinterest: a perfectly symmetrical cat eye next to a dinner spoon. “It’s so easy! Just use the handle of the spoon for the flick and the bowl of the spoon to create a perfect wing that connects to your lash line!” they all claim. Let’s give it a spin.

Step 1: Trace Line With the Handle

Angle the end of the spoon at a slight incline starting at the outer tip of the corner of your eye up toward the outer edge of your eyebrow. Once in place, use either a gel brush liner or a liquid liner like Stay All Day Waterproof Liquid Eye Liner by Stilla in Intense Black ($20) to trace the edge of the spoon from the outer corner out to your desired length for the flick of your cat eye. For more drama, go longer; for less, keep it short. Maddie found this step to be rather simple.

Now take the bowl of the spoon and lay it directly on top of your lash line so that the outer curve of the spoon swoons up and outward to meet at the outside edge of where your flick ends. As you can see, “Whaaaaaat?!?!” was Maddie’s reaction! Her initial demeanor and confidence went right out the window as she struggled to figure out how to line up the spoon in the right place.

Step 2: Trace Flick With the Spoon

This method actually seems to make sense and in theory appears to be fairly foolproof. You have a straight edge to trace, so you should end up with a straight line, right? Let’s see.

Line the business card up with the outside corner of your eye, angling the card up towards the outside end of your eyebrow. Then simply trace a line from the outer corner to the length you want your flick to be.

Remove the business card and then freehand the outside edge of the flick with a line that hits slightly above your upper lash line.

If you look closely, the resulting cat eyes are not precisely even, which this hack suggests you will get. Maddie felt that the card helped with the line on the first step but the second step of free-handing the connection line was actually more effort that free-handing the whole thing.

We use tape to edge a room before painting, to create a stencil on a bag when we’re DIY-ing a design, so why wouldn’t this work on our face? This seems logical, but can you really keep the lines clean with all the curves of your face? I put Maddie to the challenge.

Use Scotch tape to create the guideline for the outer flick. Line this up the same way you lined up the business card and the spoon using the outside corner and end of your eyebrow as a guide.

Now that your tape is in place, trace on the line.

I feel like I don’t need to say much here because the image says it all! Obviously remove the tape, but be careful not to remove your skin in the process!

Surprise: this was actually the winner out of all of them in terms of the most consistent final look. But it’s safe to say that Maddie will NOT be trying this method again. It was not worth the hassle and potential damage she is causing to her skin in the process.

We had a lot of fun shooting, LOL-ing and trying these hacks out, but we are going to have to give all of them a big fat MISS! When it comes to eyeliner, you’re better off practicing free-hand until you get good enough to whip out those cat eyes in minutes flat! The good news, ladies, coming from a pro: You will get better! I was awful when I first attempted anything to do with eyeliner (well, all things makeup, if we are being honest here), so just keep playing and soon enough you will have that “Aha!” moment.

How to DIY Your Own Hot Summer Romper

How to Make a Disco Ball-Inspired Skirt

Make a Statement in These DIY Acrylic Earrings