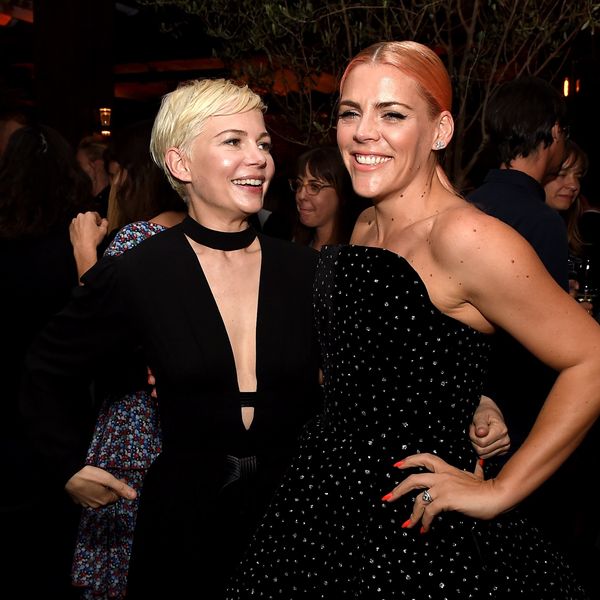 Michelle Williams and Busy Philipps: After meeting on Dawson's Creek when Philipps joined the cast in season 5, the two actresses became fast friends and remain besties to this day. We've seen them hit red carpets together and be each other's dates to awards shows, and if you're as much of a fan of Philipps' Instagram presence as we are, you're likely to see Williams pop up there, too.

"My friendship with Michelle has stood the test of time, and we've been together through many different versions of our lives," the Busy Tonight host told The Advocate in 2013. "I love her as deeply as I love almost anyone." (Photo via Kevin Winter/Getty Images)

Emma Stone and Jennifer Lawrence: Stone has described Lawrence as one of her "most loyal friends for years," and in a recent interview conducted by Lawrence for Elle, their easy dynamic shined as brightly as their admiration for one another. "I think friendship is pretty much everything," Stone told her BFF in the Elle interview. "Here's another turning-30 thing I've realized: You pick your family. You realize that your friendships, the people who go with you into these next phases of your life — you're choosing your family." (Photo via Steve Granitz/WireImage)

Maisie Williams and Sophie Turner: Not only do these two Game of Thrones costars have matching BFF tattoos, but Williams is set to be a bridesmaid at Turner's upcoming wedding to Joe Jonas. If that's not true friendship, we don't know what is. (Photo via Kevork Djansezian/Getty Images)

January Jones and Kiernan Shipka: They played mother and daughter on AMC's Mad Men, and while 41-year-old Jones and 19-year-old Shipka might not have the same kind of BFFship we see between other Hollywood stars, their mutual affection is both palpable and adorable. Need proof? Just check out the comments section on either one of their Instagram accounts. You can usually find them complimenting each other, trading inside jokes, or simply letting the other know they love them. (Photo via Stefanie Keenan/Getty Images for CDG)

Chrissy Teigen and Kim Kardashian West: There's likely no better friends to Kim Kardashian than her sisters, but Teigen might come close. The two have known each other since 2010, and their fun-loving nature and sense of humor (not to mention, of course, their similarly lavish Hollywood lives) have keep them close for years. Their banter on social media proves that neither of them takes the public scrutiny of their lives too seriously — and we love them for it. (Photo via Dimitrios Kambouris/Getty Images for EMM Group)

Tina Fey and Amy Poehler: After first meeting at a Chicago improv class in the '90s, Fey and Poehler went on to become two of the most powerful women in comedy and one of Hollywood's funniest and most beloved duos. Together they've co-anchored SNL's "Weekend Update," co-hosted the Golden Globes (three times!), and co-starred in multiple films. So far, they've yet to become our best friends, but we're still holding out hope. (Photo via Theo Wargo/Getty Images for Spike TV)

Courteney Cox and Jennifer Aniston: These two have stayed tight since Friends brought them together in the '90s, and to this day they attend Hollywood and charity events together, publicly celebrate each other's milestones, and, of course, maintain a loyal and loving friendship out of the spotlight, too. "She's been there for me through thick and thin," Aniston told More magazine in 2014. (Photo via Steve Granitz/WireImage)

Nina Dobrev and Julianne Hough: Since being introduced by a mutual friend seven years ago, Hough and Dobrev have been thick as thieves, showing up together at events and all over each other's social media feeds. In 2018, they told People that they plan on taking joint vacations with their families when they eventually have children. Cute! (Photo via Kevin Winter/Getty Images)

The Sisterhood of the Traveling Pants Stars: Amber Tamblyn, America Ferrera, Blake Lively, and Alexis Bledel have stayed close since they played BFFs in the 2005 coming-of-age film adaptation of Ann Brashares' novel. And now that they all have kids of their own, they make sure to arrange playdates and stay in touch via an ongoing group text. "The four of us are still best friends. To be able to create something together again has always been a dream of ours," Lively told People in 2016. (Photo via Jason Kempin/WireImage)

Abbi Jacobson and Ilana Glazer: Broad City is based on the IRL friendship between Jacobson and Glazer, who met in 2007 in an improv class. The two became fast friends, and even though their Comedy Central show is ending, they'll be working behind the scenes on projects for years to come. Let's hope they end up back in front of the camera together, too. (Photo via Jesse Grant/Getty Images for Comedy Central)

Oprah Winfrey and Gayle King: These two have been best friends since they worked at a Baltimore TV station in the '70s, and in many ways, they're the epitome of Galentine's Day goals — and just life goals in general. Together they've shared successes (King's TV news career and Oprah becoming, well, Oprah), tough times (including nonstop rumors and King's divorce), and everything in between, weathering it all with an unbreakable, fiercely loyal bond. May we all cherish our own Gayle and/or Oprah. (Photo via Kevin Mazur/Getty Images)

Salma Hayek and Penelope Cruz: The two actresses have been close friends for years and even costarred in the 2005 film Bandidas. "We really respect each other," Cruz told the Los Angeles Times when they were promoting the movie. "But if one asks a question to the other one, we know we're going to hear the truth. And I think that's why we are close friends and closer every day, because there's no B.S. in our relationship." (Photo via Kevin Winter/Getty Images)