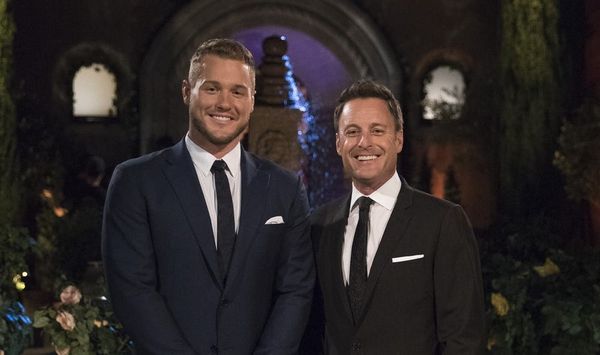 The first trailer for season 23 of The Bachelor shocked fans when it showed Colton Underwood attempting to escape the cameras by jumping over a fence that was nearly as tall as he was. Now, with the premiere just a few weeks away, the show’s longtime host, Chris Harrison, is offering up a little insight into the jaw-dropping moment.

“There’s a lot to be said about the fence-hopping scene,” Harrison told Us Weekly at the iHeartRadio Jingle Ball on Friday, November 30. “I was approximately 10 yards behind him when it happened. I may or may not have been the reason that he hopped the fence.”

While Harrison didn’t reveal exactly what he may or may not have done to spark the dramatic response from Underwood, he did says how impressed he was by the physical feat. “To the actual athletic accomplishment of the fence jump,” he said, “you have to understand, the fence was about 6-foot-5, 6-foot-6. He did not touch the fence or touch the top of the fence after his feet left the ground.”

Also impressive to Harrison? Underwood’s willingness to be so “brutally open, honest, and vulnerable” throughout the process. “For a 47-year-old man, that would have been tough, but for a 26-year-old guy, he’s talking about being a virgin and why and all of his issues and things. … He was just brutally honest about it and I have to give him a lot of credit, because that’s not an easy thing to do knowing that millions of people are going to be dissecting it and talking about it,” he told Us Weekly.

“It was compelling to me to dive into why, because things weren’t adding up and I don’t think things added up for a lot of people,” he continued. “So for him to open up and to talk about why and to let all of us in this season — which he does — is fascinating.”

Whatever Underwood’s motivation, he certainly isn’t shying away from his truth. On December 3, the show released a new poster that features the athlete spoofing The40-Year-Old Virgin.

Season 23 of The Bachelor premieres on ABC Monday, January 7, at 8pm ET.

What do you think Chris Harrison could have done to spark Colton’s shocking reaction? Let us know @BritandCo!