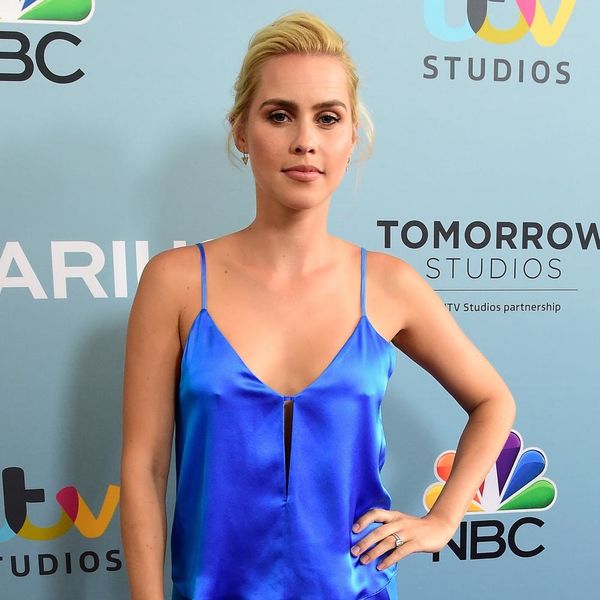 Claire Holt and Andrew Joblon are married! The Originals star and her real-estate exec fiancé tied the knot over the weekend in what looked like a stunning ceremony — complete with their dog, Teddy, dressed to the nines.

Holt posted a pic of the happy couple and their mixed-breed rescue pup on Instagram on Sunday, captioning it with the wedding date. “8.18.18,” she wrote, along with a heart emoji. Joblon posted a different shot of the couple kissing under a stunning floral arch, and used the same simple caption as his new wife.

Their wedding photographer, Kelley Raye, also posted a snap of the newlyweds and made sure to give the couple’s adorable doggo his due, too. “Can we all just take in Teddy’s ‘tuxedo’ for a minute?” Raye wrote. Teddy indeed looked dashing in his collar and black bow tie (and dog tag, natch).

Holt and Joblon first started dating in early 2017, making their relationship public in July when they documented a romantic vacation to Italy. They announced their engagement in December with a candid pic of them kissing as Holt showed off her sparkling engagement ring.

It’s been a period of endings and new beginnings for Holt. Eight months before getting engaged to Joblon, she split from her ex-husband Matthew Kaplan after he filed for divorce one day before the couple’s first wedding anniversary. Both cited irreconcilable differences in the court documents.

Then, in August, The Originals, the Vampire Diaries spinoff on which Holt had starred since 2013, ended a five-season run on the CW. “The Originals was a beautiful family to be a part of,” her costar Charles Michael Davis shared on social media for the show’s finale. “I loved working with everyone who made the show possible. Thank you to all the fans for supporting us and making us a part of your lives.”

Congrats to Holt and Joblon on their new beginnings!

What did you think of Claire Holt’s wedding pic? Let us know @BritandCo!