7 Colorful Celeb-Approved Outerwear That Will Brighten Your Winter 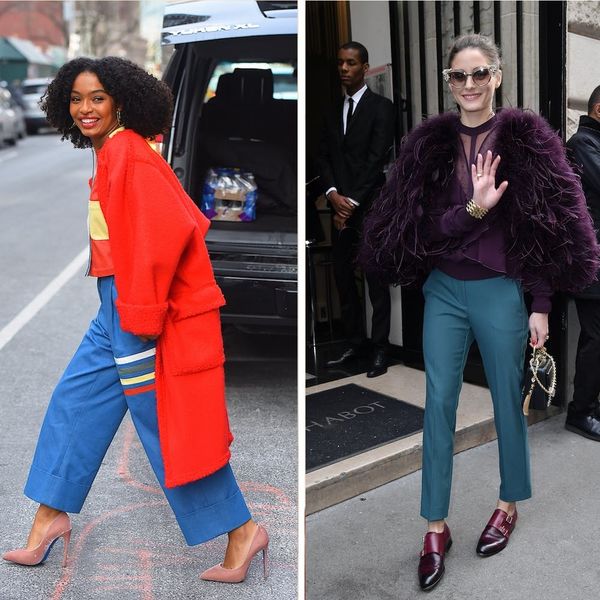 It might be the heart of winter right now, but just because we're short on daylight doesn't mean we should be skimping on color. In fact, winter 2018 has been the season of the colorful coat. Click through to see how your fave celebs are sporting bright hues this season.
Yara Shahidi: She's only 18, but the Grown-ish star is already making strides in the fashion world. While promoting her new show earlier this month, the teen wore this striking oversized red coat by Opening Ceremony. And just because it's bright red doesn't mean it's not versatile — Shahidi has been photographed in this outerwear quite a bit this winter. (Photo via Robert Kamau/GC Images)
Kate Middleton: Not only is she the Duchess of Cambridge, but Kate Middleton is also the queen of the colored wool coat — which isn't just stylish, but is also perfect for chilly London weather. In addition to her Sportmax coat, the expectant royal wore an all-blue look including a Séraphine maternity dress, a patterned scarf by Beulah, suede heels, and sapphire earrings that match her iconic engagement ring. (Photo via Jonathan Brady/AFP/Getty)
Gigi Hadid: As one of the top supermodels RN, Hadid doesn't shy away from bold style choices, like this oversized hot pink puffer by Norwegian designer Christina Ledang. And if that wasn't eye-catching enough, she paired it with a matching turtleneck also by the designer and glittery pink and marigold culottes by Christopher Bu. (Photo via Raymond Hall/Getty)
Olivia Palermo: Despite the cold, Palermo showed up at the Elie Saab fashion show for Paris Haute Couture Fashion Week Spring/Summer 2018 looking like a tropical bird. Aside from her plum feathered coat, the 31-year-old wore a matching top by the designer, a pair of blue jeans, and some oversized cat-eye sunnies. (Photo via Jacopo Raule/GC Images)
Gabrielle Union: The 45-year-old stunned in NYC earlier this month in a powder blue coat by 3.1 Phillip Lim when she was promoting her new film Breaking In. The casual shoulder drape also shows off that gorgeous peach silk lining in the coat. *Chef's kiss* (Pho via Gotham/Getty)
Lake Bell: Talk about a statement look! The Home Again actress wore this bright green number to the Armani Prive Fashion Show in Paris last week. With a long coat this loud, she kept the rest of her outfit simple with a black minidress, booties, and clutch. (Photo via Jacopo Raule/GC Images)
M.I.A.: The singer/rapper is at Sundance for her autobiographical documentary Matangi/Maya/M.I.A., and despite the cold, she looked like a ray of sunshine in this furry orange coat. (Photo via Ray Tamarra/GC Images)

Which one of these is your favorite? Tweet us @BritandCo!

Which one of these is your favorite? Tweet us @BritandCo!

Kimberly Wang
Kimberly Wang writes about all things pop culture, tech, style, and beauty. She's a Bay Area transplant and has an MFA in Creative Writing from Columbia University. On a sunny New York day, you can find her hanging out with her mini schnauzer Isabelle Jellybean on a blanket in Central Park.
Celebrity Style
Celeb Style
Celebrity Style Coats Winter Style