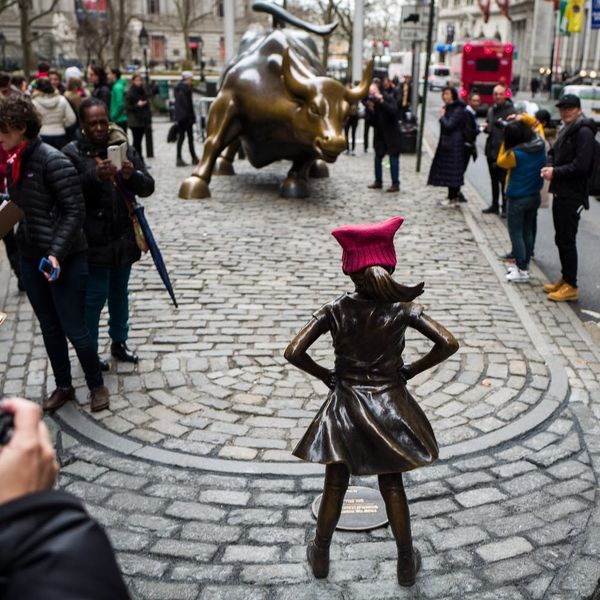 Though not all art is initially given a warm welcome by the community and may even raise controversy, most people were pretty psyched to find out that NYC’s “Fearless Girl” statue would be standing her ground for longer than expected. But now, it turns out one person isn’t so thrilled about the situation, and it’s starting quite a conversation.

While the “Fearless Girl” piece by artist Kristen Visbal was originally only scheduled to stay in her spot on the Department of Transportation’s property until April 2, Mayor Bill de Blasio decided to allow the wildly popular installation to remain until February 2018.

Maybe my favorite moment so far with my #fearlessgirl #wrenthefearwrecker

However, according to The Guardian, sculptor Arturo Di Modica, creator of Wall Street’s “Charging Bull” statue, is now trying to claim that because of the new statue’s presence, his artistic copyright has been infringed upon and that his legal rights have been violated. However, since the “Fearless Girl” statue was installed facing his own piece, but in no way touches it or alters it directly, it doesn’t look like Di Modica has as much ground to stand on as the “Fearless Girl” herself.

It’s also interesting to note that when Di Modica first installed his own massive bronze statue, he did so in the middle of the night WITHOUT A PERMIT in an attempt to make a statement about the New York Stock Exchange’s 1987 market crash. When the public made it clear that they wanted the bull to remain where it was, the city granted it a permanent spot. Now, though, Di Modica apparently thinks that his once-rogue art has more rights than a new piece which was actually given a permit by the mayor himself.

Speaking of the Mayor, here’s what he has to say…

Men who don’t like women taking up space are exactly why we need the Fearless Girl. https://t.co/D2OZl4ituJ

And considering the public has been swaying decisions in this situation so far, if Twitter is any indication, the community doesn’t want her going anywhere anytime soon.

@GMA That #Fearlessgirl is there for a reason. That bull was put there when it was needed & now that girl is needed. I hope they fight for her

#Fearlessgirl is getting under the #ChargingBull artist's skin. Good. That's what Fearless Girl is here for. 💥🥊 https://t.co/0h6x2JcDDo

Frankly, maybe they should remove the statue of the Charging Bull and leave the Fearless Girl in its place. #chargingbull #Fearlessgirl

What do you think about the “Bull” artist claiming the “Fearless Girl” violates his rights? Let us know @BritandCo!

Desiree O
Desirée O is a ‘Professional Bohemian’ who loves anything and everything related to the arts, entertainment, and pop culture. She ADORES being a ‘Newsy’ for Brit + Co, covering all of the latest tidbits of awesomeness that you want to read about. When she’s not writing, she’s either making messy art, going on long adventurous walks with her camera, or poking around over at bohemianizm (http://www.bohemianizm.com/). You can find out about Desirée O and her work at http://DesireeO.com/ or follow her on Twitter @DesireeO.
Art
Entertainment
Art Feminism Politics
More From Entertainment