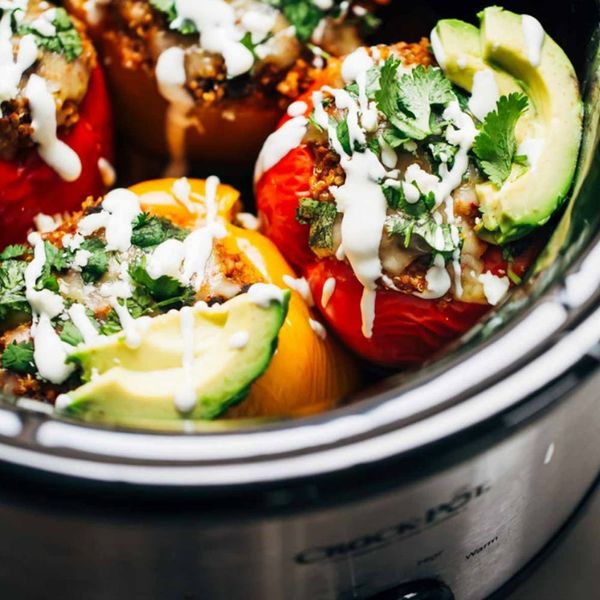 Almost everyone has a crock pot stashed away somewhere. Maybe yours was a graduation or housewarming present or was handed down from your mom or bought on a whim at a yard sale but never used. If you’re thinking crock pots belong to the era of 1970s housewives and the recipes they cooked in them, it’s time to revisit the terminology. Because crock pot = slow cooker, and slow cookers are SO on trend right now. They’re being used to whip up everything from pasta to dessert to Thanksgiving Dinner. Read on to learn why we love them so much (and why you should too), and what else you need to know about the best easy appliances out there, like the pressure cooker and the Insta Pot.

If the term crock pot summons images of vintage shag carpeting, macrame planters and avocado refrigerators, it’s because the convenient one-pot appliance made its debut in 1970, when Rival Manufacturing acquired the patent for a little-known invention called the Beanery and relaunched it as the Crock-Pot. Models varied, but the essential features were a stoneware dish or “crock” that was dropped into a base with a built-in heating element that plugged into an outlet, allowing foods like soups and stews to slowly come to a simmer and cook all day until dinner time. In some models, the ceramic crock could be removed from the base and brought to the table for easy serving, and the one-pot cleanup was a breeze — all features that make them still beloved by foodies today.

Just as the brand Rollerblades preceded the generic term inline skates, Crock Pot was the first slow cooker and was soon followed by a slew of others. Recipes for the two can be used interchangeably today. Slow cookers may have started out being all about soups and stews, but today any dish where you can dump all the ingredients into one pot and let it cook all day works perfectly.

A pressure cooker is also a one-pot appliance, but there the similarities end. A pressure cooker applies a different type of cooking technology. Here you have a pot with a tightly fitting lid that closes airtight. Steam is allowed to build up inside and it’s the force of the steam getting into the food that makes it cook fast. When cooking time has been reached, you simply open a valve to let out the steam. Pressure cookers have been around for centuries. While vintage models were heated up on the stovetop and had to be handled with care or they could explode, modern electric versions let off steam gently and reliably. Pressure cookers are popular for speeding up recipes that would otherwise take a whole day or longer to cook. For example, bone broth is often simmered for 48 hours, but with a pressure cooker you can pull it off in just a few hours. Simpler soups and stews can take just 30 minutes and the results are rich with flavor.

If you want to adapt a slow cooker recipe to the pressure cooker, checkout this tool at Hip Pressure Cooking.

One disadvantage of all the one-pot cookers when cooking meat is that you have to do the browning in another pan. This is where the Instant Pot is AH-mazing. The Instant Pot has both a stainless steal pot and a sauté setting, and this allows you to sear meat and even sauté garlic, onions and other spices before you toss in the rest of the ingredients, set it and forget it. If you’re cooking beef, you can’t just skip the searing step, because browning is more about instilling flavor than it is about changing color — what chefs call the Maillard reaction. To get a bit food-science-y, searing at a high heat rearranges some of the simple sugars and amino acids naturally occurring in the meat and gives the finished dish complex bittersweet flavors. The result is way more flavorful than if you steamed or boiled the meat, which is essentially what happens when you put un-browned meat in a crock pot with some liquids and other ingredients.

You can use all your fave slow cooker recipes with the Instant Pot. Just choose the slow cooker setting. It also has settings to steam rice and make yogurt, as well.

Sally Jones
Sally Jones is a writer and editor living in New York City. She has worked at many websites including iVillage, Ladies Home Journal, More, Parenting, Cosmopolitan, The Knot and YourTango, in jobs ranging from editor to COO. Renovation and interior design are her unhealthy obsessions hobbies. She has renovated every home she's lived in, including the rentals, and like... whoa, who does that? You can catch her at her blog Renov8or.
Appliances
Recipes
Appliances Crock Pot Recipes Food Trends Foodie
The Conversation
Reviews:
More From Recipes