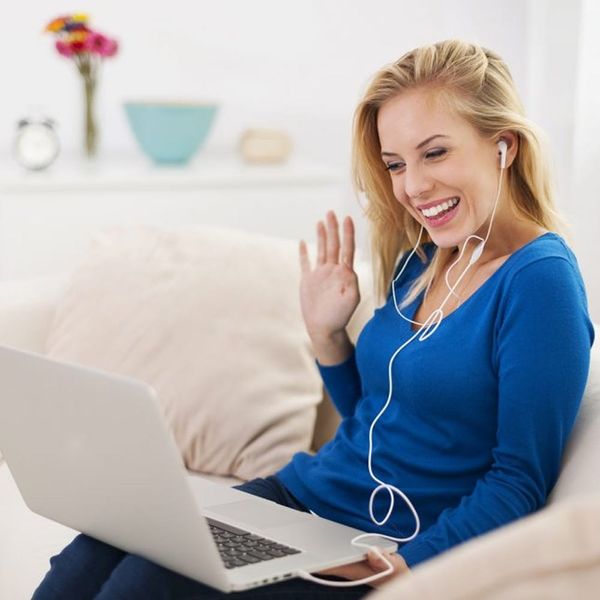 Millennials seem to catch a lot of heat these days for our so-called “dependency” on social media and digital devices. We can maybe plead a little guilty to those charges, but who said that our beloved tech is all bad? Beyond just swiping right and posting ‘grams, thanks to video chatting services like Skype, we’re all able to stay connected with friends, loved ones, significant others, and pets (yes, we know you talk to your pets) in the midst of all manner of crazy circumstances… and that’s way more than “just a distraction,” right? Keep reading for four very different stories of love with one thing in common: video chatting.

1. A Modern-Day Happily Ever After: The Harveys’ modern love story unfolded across social media, starting with Twitter. Sammi started following Branden in 2012, and after a year of communicating in 140 characters or less, they began messaging each other. At the time, Sammi was living in Nashville, TN, while Branden was across the country in Portland, OR.

Sammi had plans to study abroad in Europe, and when she told Branden about her upcoming travels, he asked her on a first date — via Skype! They spoke via video chat every day while she was abroad, and even when Sammi was stateside again, made Skype a major part of their relationship between cross-country flights. Three years into their bicoastal LDR, Branden proposed and Sammi said yes! (Photo via Kailey Thompson Photography)

2. Pug Love Knows No Bounds: Video chatting isn’t just for humans! After Jen McDermott moved from Australia to the US, she used Skype to have regular check-ins with her beloved pug Frank — who was staying with Jen’s sister — from the other side of the world. Luckily for both parties, the pooch recently relocated to New York City so he can hang with his human screen-free, but video chatting made the transition way easier (even if Frank couldn’t make the calls himself).

3. Keeping Close With Loved Ones in the Military: If anyone can speak to the wonders of video chatting, it’s Justine Houston-Brown, who’s used Skype over the years to stay connected to both her romantic partner and family in the military who were stationed overseas. Justine’s now-husband was even able to watch her walk across the stage at her graduation while he was deployed with the military, and Justine’s whole family used Skype more recently to stay in touch with her brother, a Sergeant who was serving in Afghanistan. This year, Justine’s brother even saved up his care packages to open in front of the camera for his parents (with a Santa hat on his head, of course).

4. A New Mother’s Day Tradition: Three years ago, Stefanie Rosenfield moved to Thailand to teach English, leaving the rest of her friends and family — including her mom — here in the US. From remote jungles and mountaintops, she’s managed to maintain video chat dates with her mother once a week (or more). Stefanie has even made a Skype call part of her annual Mother’s Day tradition. Sounds like the best of all worlds to us!

Alli Hoff Kosik
Alli Hoff Kosik is a freelance writer who is passionate about reading, running, rainbow sprinkles, her lipstick collection, watching embarrassing reality TV, and drinking pink wine. She lives in Brooklyn with her husband and (in her dreams, at least) three golden retriever puppies. Listen to her talk books on The SSR Podcast.
love
Relationships
love
More From Relationships