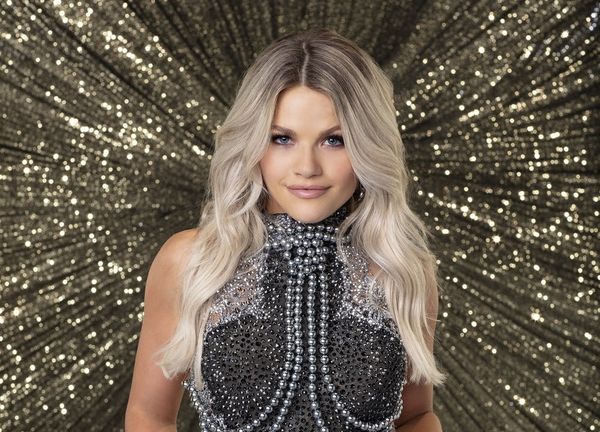 Witney Carson has her eye on Mirrorball glory. The Dancing With the Stars pro, who previously won season 19 of the ABC ballroom competition with then-partner Alfonso Ribeiro, is wowing the judges again with her season 27 partner, Milo Manheim. They established themselves as ones to watch early on, and they intend to live up to those high expectations.

But Carson isn’t just killing it on the dance floor. She also served as a mentor for one of the teams on Dancing With the Stars: Juniors, and she recently launched her own line of activewear, CAPRI. And somehow she still found time to chat with us. Read on for the scoop on all things DWTS.

Brit + Co: You’re partnered with Milo Manheim this season. Did you know much about him before you met?

Witney Carson: I didn’t really know who he was, but I told my little sister, who’s 14 years old, and she freaked out. She’s a huge fan of Milo. So I learned everything I needed to know from my sister. And then I actually watched the movie, Zombies.

B+C: Has your sister met him now?

WC: My sister has met him. When we were first partnered, we FaceTimed her, and then she came back and we did Halloween Horror Nights with everybody for my birthday.

B+C: What’s the first thing you do when you meet your partner for a new season of DWTS?

WC: The first thing I do is just kind of get to know them. This whole process is really based on the relationship you have with your celebrity, so I just try to get to know them as much as possible — go to dinners, hang out, make sure he meets my husband and my family. And usually I’ll ask him what kind of music he likes and what his hobbies are.

B+C: You and Milo have had some of the highest scores week to week. How do you feel about your competition?

WC: Coming into this, I was feeling a little bit confident because I knew he had some dance experience with Zombies. He obviously had some rhythm, so I was really excited about that. And then once we hit the premiere, everybody was so good. It was like, “Wow, so we’ve got some serious competition.” And we still do. Everybody is progressing so much each and every week, so even though we’re getting good scores, which is awesome, there are other people who are really making a mark in this competition. I think DeMarcus [Ware] is really good; I think Bobby [Bones] is getting better and has a great personality; I think Alexis [Ren] is really good. I can honestly say I haven’t experienced a season where there were this many good dancers. It’s tough. But we just focus on us and try the best that we possibly can each week. And that’s been our goal since day one.

B+C: Do you have a favorite dance from this season?

WC: I really loved our salsa! That was one of my favorites. And I loved our Halloween dance that we just did. That was one that I felt super passionate about. It was contemporary, so kind of in my wheelhouse, and it was just really fun to do.

B+C: You guys are in a lot of long rehearsals together, which probably takes a toll. How do you deal with frustration or setbacks or challenges?

WC: Positivity can go a long way. Obviously you’re going to get frustrated with yourself or with your partner or with the situation, and I think it’s really important just to take a step back and take a deep breath. That’s what we do. If we’re ever frustrated, we just take a second, we go away, we collect ourselves, and then we get back into it. You’re on a time crunch — you only have a certain amount of time to get the steps, and then you have to go live — so it is a stressful situation, but Milo and I have a great connection. If he’s really frustrated, I kinda lift him up, and vice versa. But we don’t get frustrated too often.

B+C: What are you working on now?

WC: This week we’re working on foxtrot, which is a little difficult. He says this is the hardest dance he’s had to do, just because it’s more structured, so we’re focusing on the frame, the posture, the technique. It’s also a slower dance, so he has to have way more control in what he does and how he moves. He doesn’t love this one. It’s country week, too, and he doesn’t really like country. I love country, so I am all about it. I love this dance.

B+C: Besides foxtrot, are there certain dances that you find more difficult to teach?

WC: I usually try to stay away from samba and rumba. Those are the two dances that I really don’t like to teach, just because the rhythm and the technique combined is really hard to perfect. Even for professionals who have been dancing for years and years and years, it’s very difficult to look good. So I try to steer clear of those.

B+C: This is your 10th season as a pro on DWTS. Do you still keep in touch with your former partners?

WC: I do! I’ve been very blessed to have some amazing celebrity partners. Alfonso [Ribeiro], obviously — he’s like my brother. And I still talk to Von Miller all the time, I still keep in touch with Carlos and Alexa [PenaVega], and Frankie [Muniz] was a special partner, too. And I think I’ll know Milo forever.

B+C: You and Alfonso were so fun to watch. And you won the Mirrorball that season!

WC: Yeah, you know, at that time, it was my second season and he kind of helped me. He’s just so knowledgeable in this industry. I feel like he really took me under his wing and showed me how to maneuver the industry and how to be confident in myself. That was a very, very special time.

B+C: Speaking of taking people under your wing, you were a mentor on this season of DWTS: Juniors. What was that like?

WC: It was very different for me. I really, really loved it because I was able to kind of connect with these kids and teach them in a different way than I normally do. I wasn’t dancing, so I had to completely let go of my control and trust that they’d be okay. I really got to love them, genuinely. I hope it comes back, because I would love to do it again.