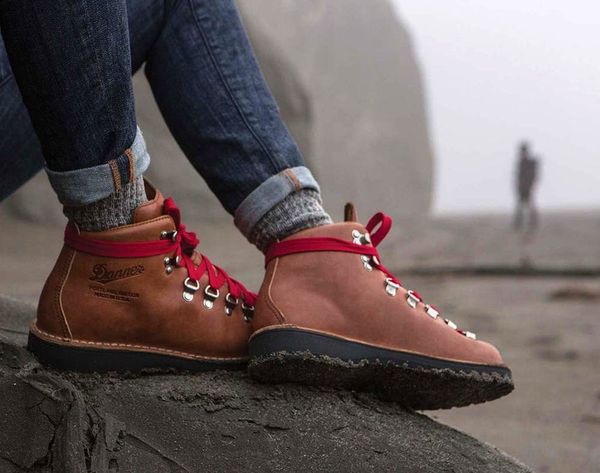 It’s officially winter and chances are you’re now in full hibernation mode. If you DO venture out it’ll probably be to the movies. And if you do go to the movies we’re guessing it might be to see Reese Witherspoon in her new film Wild – we’re going on a bit of a “if you give a mouse a cookie” kind of tangent here, but just roll with it.

The film, released December 5th, is a movie portrayal of the bestselling memoir by Cheryl Strayed about her solo trek across the Pacific Crest Trail. Not so surprisingly, a main icon of both the book and film are a pair of hiking boots – well, a pair of Danner’s Mountain Light Cascades boots to be exact. The leather shoes are featured on the cover of the book as well as in the opening scene of the film.

Rather than finding a pair that looked similar, Fox Searchlight approached Danner to make the exact model Strayed wore during her 1995 journey to be featured in the film. The Portland-based company obliged and also made Witherspoon more than 30 pairs of the discontinued style. But good news for you: You now don’t have to be best buddies with Elle Woods to snag a pair of these pretty kicks.

With Fox Searchlight’s help, Danner has released limited edition Mountain Light Cascades to be marketed with the movie’s release. You can find them on Danner’s site, as well as at REI and, of course, Urban Outfitters. While they do look great, they’re also legitimate hiking boots, so they’re not super cheap. These rugged, waterproof kicks come in at about $300 for a pair. So whether you’re actually going on an epic, adventurous trek or just trekking across the city in winter, these boots are ideal for both purposes.

If you’re into the look of these hiking boots, but not so into the price replicate the look by snagging one of these similar pairs and popping on some red laces:

Keep the authentic hiking boot feel with these pairs from Timberland ($120) and Doc Martens ($90). Get the same look without losing any of the quality.

Or, on the other hand, go full fashion on this thing and opt for a pair of heeled hiking boots ($65) or a slimmer, faux leather pair ($32). You definitely won’t be able to *actually* go hiking in either of these, but you sure will look good.

What’s your take on the hiking boot trend? Do you like seeing it on the streets or do you think these boots should be reserved for the trail? Share your thoughts in the comments below.