7 Things You Should Never Do in Your Dating Profile Photo 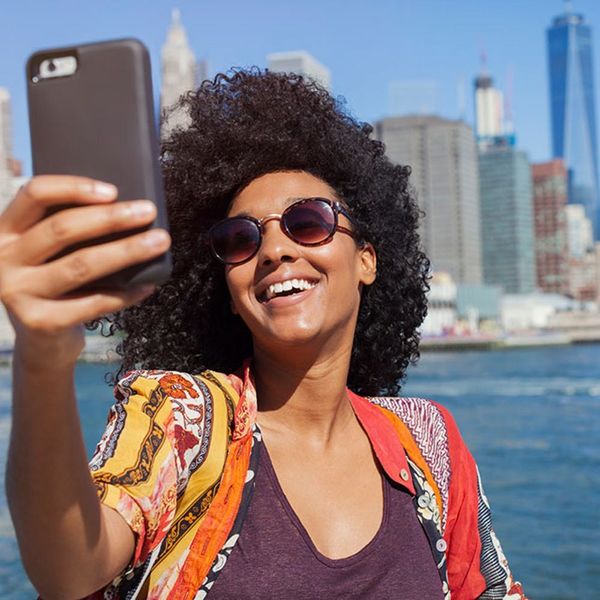 As you compile your profiles for your dating apps and sites of choice, you might find yourself questioning the perfect photo to use. Should you use an old picture of you with your favorite haircutever or a more recent one in which your hairstyle is slightly less fab? Does your cat need to have a supporting role in the image? Should you go with something more formal or more candid? There are so many questions! We have good news, though: A recent deep-dive analysis applied some pretty awesome technology to the matter of profile pictures, and we think the findings will help you feel more confident next time you post a pic.

Matchmaker and dating site reviewer DatingScout used a deep learning algorithm that can detect more than 6,000 distinct elements of photos — everything from scenic backgrounds and specific dog breeds to clothing items and facial expressions. The team took the results and analyzed them by comparing the use of particular elements based on gender, sexual orientation, age groups, and other demographics. And since DatingScout used this artificial intelligence technology to analyze more than 22 million profile pictures, you can bet they got a pretty comprehensive look at what’s happening on dating apps and sites worldwide.

DatingScout dating expert Celia Schweyer has the following seven major takeaways from the profile photo analysis. Keep scrolling to read more, then incorporate these tips into your own prof pic game to maximize the potential for success on the dating apps and sites you use.

1. Ditch the sunnies. According to DatingScout’s findings, sunglasses are the most popular clothing item to take center stage in women’s photos. Glasses are present in 13 percent of all images. Schweyer says the accessory might be overplayed, however. “Too many people think that sunglasses look so good on them that they wear them in every picture they upload,” she says. “It’s too bad that this very stylish accessory hides the eyes entirely and leaves a lot of a person’s appearance unrevealed!” Lose the sunglasses and let the people see those bright, beautiful eyes.

2. Cool it with the selfies. We’re all guilty of using our fave self-captured photos as our profile pictures on various platforms, but Schweyer doesn’t recommend overdoing it with them on dating apps. No matter how talented you are at taking selfies, it’s nearly impossible to include other elements in them (a beautiful backdrop! your dog!), and those other elements can be great additions to a profile picture. An excess of selfies, Schweyer notes, can also be boring and might even come off as self-centered. Yikes.

3. Care about quality. You don’t have to be a professional photographer or use an expensive camera to get an ideal profile photo, but it’s ill-advised to use a blurry picture. If you’re posting a candid photo from a phone, just be sure that it clearly shows that gorgeous face of yours.

4. Diversify! “I would never recommend using just one picture,” Schweyer tells us. “A good dating profile has four to five pictures, all showing a different side of the person.” The lead image should capture your face clearly, while the others might showcase you in action practicing your favorite hobby, touring an exciting destination, or hanging out with friends. Schweyer also notes that profiles that include just one photo can often appear suspicious, as they indicate a lack of effort or that the person might even have something to hide.

5. Take a second look at the background. This one might seem like a given, but don’t be so sure. Schweyer says she was shocked by the number of toilets that were lurking in the background of the profile pictures reviewed for the analysis. Gross! Add that to the list of reasons to be cautious about bathroom mirror selfies.

6. Stop blending into the crowd. If you’re posting several photos to your profile (which you totally should), it’s great to include one or two that feature you alongside your friends and family, but don’t miss the opportunity for a solo shot. Keep in mind that potential significant others might be wary if all of your photos feature you with your arms draped around the same people.

7. Say farewell to filters. Yes, the Snapchat dog filter is super cute, but you shouldn’t screenshot it and use it to attract a new relationship. Even more subtle filters are ill-advised. “Step back from those filters,” Schwyer recommends. “Before you let an app give you fake highlighter and luscious lips, why not spend an afternoon with your best friend taking really cool pictures of each other that are more natural?” This sounds like a great excuse for a BFF hang sesh.

What was most surprising to you about these findings? Tweet us @BritandCo!

Alli Hoff Kosik
Alli Hoff Kosik is a freelance writer who is passionate about reading, running, rainbow sprinkles, her lipstick collection, watching embarrassing reality TV, and drinking pink wine. She lives in Brooklyn with her husband and (in her dreams, at least) three golden retriever puppies. Listen to her talk books on The SSR Podcast.
Dating
Relationships
Dating Love