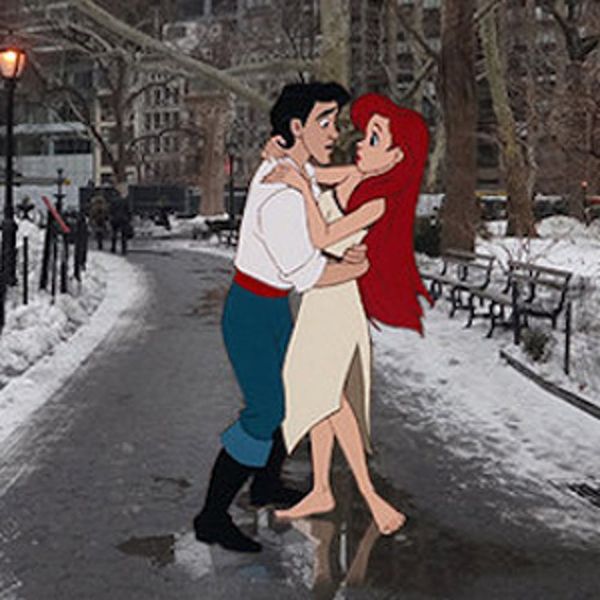 The uber-popular photography blog Humans of New York has become a cultural phenomenon, giving everyday humans like us a peek into the lives of hundreds of strangers living in New York City. Brandon Stanton, the man behind the blog, has turned his photo series into a best-selling coffee table book and raised money for well-deserving causes along the way. Inspired by Stanton’s photo series, BuzzFeed staffer Loryn Brantz wondered how some of our favorite Disney characters would fare in the Big Apple. We gotta say, it doesn’t seem like life has been easy for them.

Loryn created quotes to go along with each photo, imagining how they would respond to street photographer Brandon Stanton. Ursula was obviously a Broadway star. We think her career would have been fantastic, if only she could breathe above water.

Cinderella seems to have lost her mind a little, knitting tiny clothes for rats in Central Park. Come to think of it, that’s exactly what she did before she came to NYC. The backdrop of a snowy park bench makes it feel a little more insane now.

In this alternate universe, Ariel and Eric have just met. We imagine they accidentally walked into each other while having their faces buried in their iPhones. It happens to the best of us.

Pocahontas is particularly emo in the new world. She and John Smith have divorced, and she blames John for not nurturing their relationship. It seems like he’s a typical colonist, thinking he owns everything.

Jasmine has outgrown her rebellious teenage years, thank you very much, and has been adjusting quite nicely to city life. After all, Agrabah was a pretty big city too.

Do you think Disney characters would survive the streets of New York? Let us know in the comments below!

Amanda DiGiondomenico
Amanda is a freelance writer and graphic designer who blogs about living a stylishly nerdy life at The Spendicate. A lifelong resident of Baltimore, MD, Amanda is an art school dropout, who managed to earn a masters degree in nonfiction writing. On the weekends, she's an expert guacamole maker, a novice jogger and an intermediate yogini.
Disney
Home News
Disney Photography
More From Home News