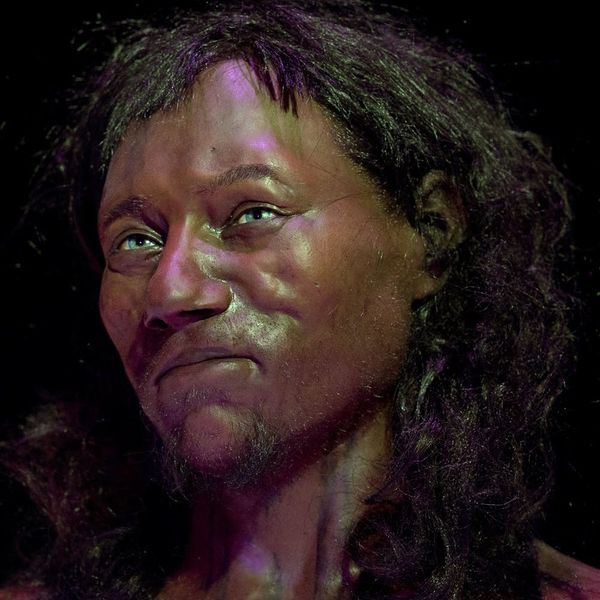 The DNA analysis of a 10,000-year-old British skeleton known as Cheddar Man has revealed a range of fascinating facts about ancient human life in Britain, chief among them that early inhabitants of the island nation looked a little different than you might expect.

According to the analysis, which used a small amount of bone powder extracted from the skeleton’s dense inner ear bone, Cheddar Man’s skin pigmentation was very dark.

“He is just one person, but also indicative of the population of Europe at the time,” said Tom Booth, a postdoctoral researcher who worked with Britain’s Natural History Museum on the project. “They had dark skin and most of them had pale colored eyes, either blue or green, and dark brown hair.”

As part of the project, researchers constructed a bust of what Cheddar Man might have looked like. The statue has blue eyes, dark brown hair, and dark brown skin.

Until recently, scientists assumed humans evolved to have light-colored skin fairly quickly after arriving in Europe about 45,000 years ago. Pale skin is better at absorbing UV light and vitamin D and the change would make sense in European climates with less sunlight.

But the DNA of Cheddar Man and other recent genetic studies indicate that humans in Europe evolved to have pale eyes long before pale skin or lighter-colored hair.

Cheddar Man’s remains were first discovered in 1903 in Gough’s Cave in Cheddar Gorge, Somerset, and at first, scientists thought he may have lived up to 80,000 years ago. The cold temperatures in the cave and layers of mineral deposits in which he was found meant that Cheddar Man was unusually well-preserved. After extracting genetic material from his skull, scientists got to work sequencing his DNA, and then compared what they found to the modern human genome.

According to the Museum, modern British people share about 10 percent of their DNA with the population to which Cheddar Man belonged, which means that, if you’re British, you can proudly say, “We are all Cheddar Man.” And you definitely should.

Lia Grainger
Lia Grainger is a freelance journalist and reluctant nomad who divides her time between Canada and Spain, weather dependent. She's written for The Atlantic, Reader's Digest, the Toronto Star and other print and online publications, and her work appears in dozens of languages around the world.
science
Current Events
science
More From Current Events