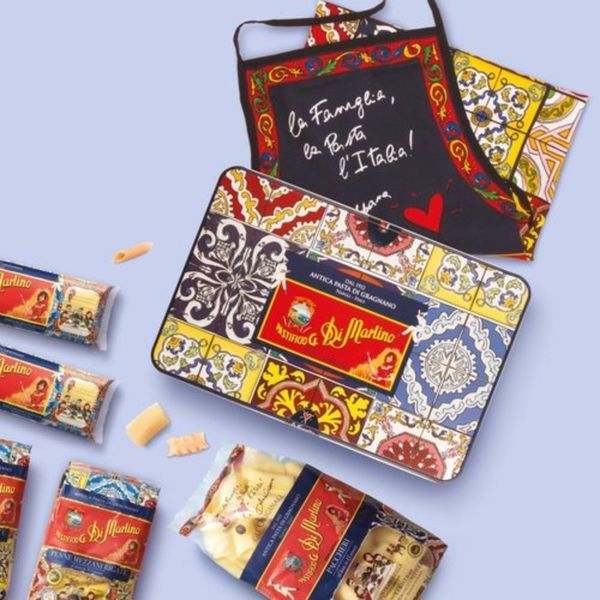 There’s no better time than the holiday season to #treatyoself, but how much would you be willing to spend? Italian fashion house Dolce & Gabbana thinks that number is… well, high. They’re releasing a line of limited-edition pasta tins for the holidays that will set you back $110 a pop.

She enjoys spaghetti, do you?! Backstage at the Spring Summer 2018 Women's Fashion Show everyone wanted to try some #PastaDiMartino! #DGPasta #DGFamily @pastadimartino

Just months after releasing a line of kitchen appliances, the brand announced they’re teaming up with pasta maker Pastificio Di Martino for a line of collector’s tins filled with everyone’s favorite carb-heavy treat, and it makes the perfect gift for your foodie pals… and you’ll surely be a hit at every holiday feast with these.

The brand is only releasing about 5,000 of the tin boxes (with 1,000 for us here in the States) so if you want to snag your own tin of designer noodles, you’ll have to act fast. Each tin will include three pasta shapes: spaghetti, the tubular paccheri, and penne mezzani rigate, and a super-chic limited-edition Dolce & Gabbana apron, perfect for the stylish chef in your kitchen.

Even better? Each apron will be signed by the designers themselves, so you’ll probably NOT want to spill spaghetti sauce on this one.

If you find yourself in Italy, you can grab a box of the D&G pasta at Pasta Di Martino’s stores in Naples and Bologna. For those noodle lovers in the US, the tins will be available online starting tomorrow, November 15, on their site. Select stores in New York (including Buon’Italia in New York City’s Chelsea Market) will also be stocking these collectible noodle boxes. Buon appetito!

Would you spend $110 on designer pasta for the holidays? Tell us @BritandCo!

Arielle Tschinkel
Arielle Tschinkel is a pop culture junkie who went to NYU because the Olsen twins went to NYU (really). She is a freelance writer whose work has also been featured on HelloGiggles, Refinery29, SheKnows, Bustle, Hollywood.com, and many others; and she's living her dream one Britney Spears GIF at a time. Follow her on Twitter @mrstschinkel or visit her website at arielletschinkel.com.
Designer
Food News
Designer Foodie Pasta Recipes
The Conversation
More From Food News