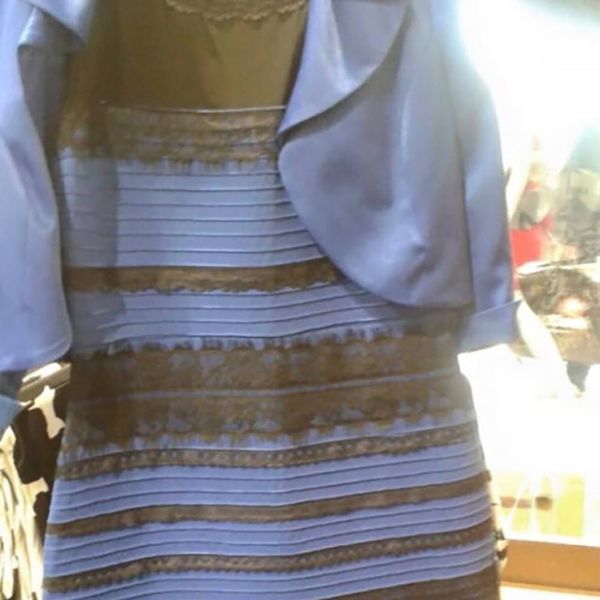 Who out there among us expected to walk into the office this AM to hear people still debating what color that damn dress is? Between a major win for net neutrality, llamas on the lam and #blackandblue vs. #whiteandgold, yesterday Twitter proved that it’s still the Internet’s watercooler. And we confirmed that, yes, we, along with Mindy Kaling, will happily be distracted by just about anything RTable.

Even with the debate still nudging along, there is some cold hard evidence out there that proves that the dress is, in fact, wait for it, deal with it — are you ready? Black and blue. The reason we’re all still torn is science, specifically primal biology and the way our eyes and brains now see color in a sunlit, oft-Instagram-filtered world.

Our good friends and champions of all things color, Pantone explain how we see color here: Light receptors within the eye transmit messages to the brain, which produces the familiar sensations of color. Newton observed that color is not inherent in objects. Rather, the surface of an object reflects some colors and absorbs all the others. We perceive only the reflected colors.

Perceive, eh? Interesting word choice, Pantone. As Wired points out, it’s a “perceptual boundary” that really caused the color debate across social media. We evolved humans have made it far enough to be able to see in daylight, but, as anyone who’s ever taken a dress out of a store to see it in natural lighting knows, daylight changes color. Your brain is supposed to figure out not just what color that dress is but what color *light* is bouncing off of said dress and then subtract that color from everything else to give you the unobjective answer. They break it down as such:

That chromatic axis varies from the pinkish red of dawn, up through the blue-white of noontime, and then back down to reddish twilight. “What’s happening here is your visual system is looking at this thing, and you’re trying to discount the chromatic bias of the daylight axis,” says Bevil Conway, a neuroscientist who studies color and vision at Wellesley College. “So people either discount the blue side, in which case they end up seeing white and gold, or discount the gold side, in which case they end up with blue and black.”

If science isn’t your thing, photo experts and Photoshop novices alike each took a turn auto-toning and white-balancing to different results. Even Wired’s photo team was “driven briefly into existential spasms of despair” seeing the dress in both (ahem) lights until deciding it was black and blue.

If all of that is making your head hurt, let’s go to the source — the designers of the Tumblr-ed dress in question, Roman Originals, who changed the description of the frock on their site to #TheDress Lace Bodycon Dress. Yesterday, all 300 dresses on the site sold out in 30 minutes and the company’s creative manager told THR the site’s seeing about a million visits to just this one page. Nice free publicity, even if Chrissy Teigen decried the dress’s wearability by throwing her own sartorial shade on the debate.

At the end of the day/week, did we all just spend 24 hours getting into a debate about the color of a dress or what question we were actually all screaming into our computers and phones (what color is this dress IRL vs. what color is this dress in this poor quality pic I posted on Tumblr?)? Yes. The dress looks periwinkle and tan to me, but I’m not going to argue with science… or, well, Photoshop.

What color did YOU think the dress is/was? Sound off below!

Lisa Raphael
In her past professional lives, Lisa has served the masses as the Editorial Director at Brit + Co, Bieber Whisperer at J-14, Golden Girls Fan Club Prez at Lifetime and Talk Show Host Understudy to Katie Couric. Now, she's taking on the sports world at The Relish, teaching Hairography 101 in her spare time and will forever be trying to fill the hole Zayn Malik left in her heart.
science
Home News
science
More From Home News