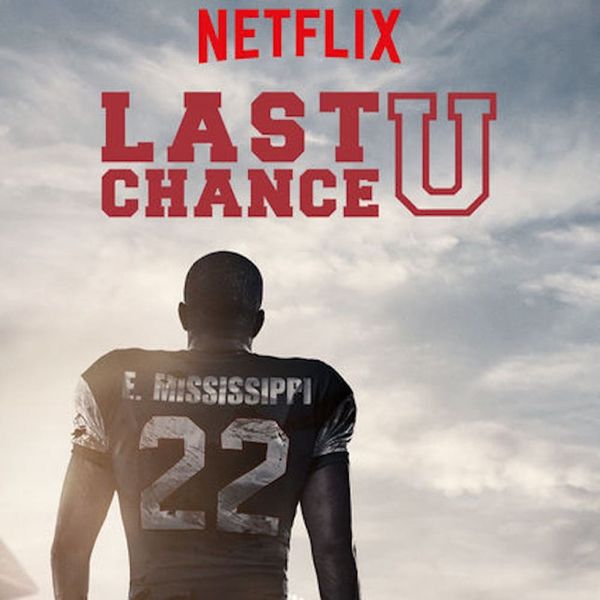 Stranger Things may have been the Netflix hit of the summer, but where the favored streaming service has really shone in the last year is with its IRL-inspired documentary series. While you wait for Making a Murderer to make a return and count the mere weeks until the Amanda Knox documentary and other new crime series Audrie and Daisy debut, you’ve gotta get into Last Chance U.

1. It’s like IRL Friday Night Lights.Friday Night Lights, one of the best TV shows of all time (sorry, that’s not up for debate), was inspired by the movie of the same name, and THAT was inspired by the book of the same name, about the real-life high school football culture in small-town Texas. Last Chance U is based on a feature GQ article and is basically the college football version of FNL, and even features an inspiring, tough-talking Tami Taylor type in Easy Mississippi Community College Athletic Advisor Brittany Wagner (she even binge-watched FNL to suss out the comparisons she was getting). This alone is reason enough. But there are more.

2. It’s an eye-opener. The football world is an intense one, and its at this level in the world that we really see how the young men, despite their tremendous talents and abilities, aren’t often groomed to go to college. Often, the stars of this doc series have had to overcome a lot in their early lives to get to where they are, and are given second chances to make it work in school so that they can also make it work in their careers as professional football players.

3. You don’t need to know or care about football to like it. Like, have you watched a Super Bowl halftime show? Great, but you don’t even need that. These people are so compelling that you’ll hardly even notice it’s about football (not unlike FNL). Bonus if you do, but don’t let it be a barrier.

4. It was just renewed for a second season, so get caught up. You heard us. Now hear Netflix directly. “We are thrilled to continue our relationship with [director] Greg Whiteley who has genuinely captured both the struggles and triumphs these young men face in a world that often seems designed to hold them back,” Lisa Nishimura, Netflix VP of Original Documentary Programming said when the show got picked up just a few weeks ago. What are you waiting for? Go!

Will you check out Last Chance U? Let us know over @BritandCo.