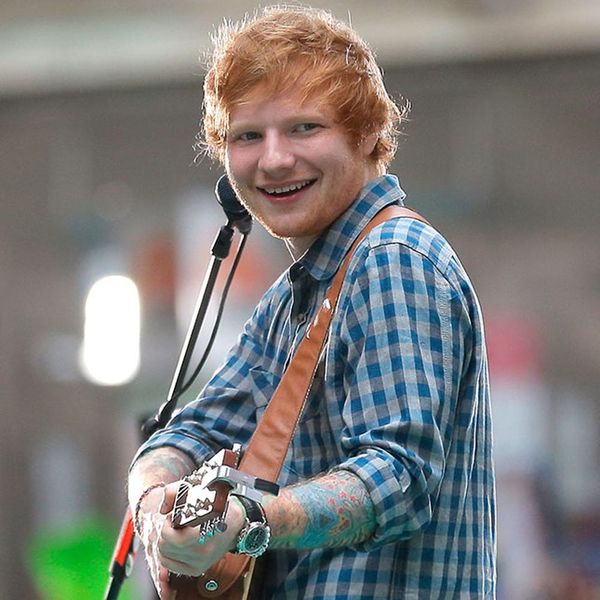 This summer Ed Sheeran has been pretty busy making a name for himself outside of his musical talents. Over the past few weeks he has been effortlessly transforming into a pro proposal assistant and baby name announcer. Not fully satisfied with lending a hand to humankind, he’s now extending his “guy with a major heart” vibe to animals. If his latest Instagram upload doesn’t further carve out what a sentimental dude Ed is, we’re not sure what else would get that (already obvious) point across.

This morning, the known T.Swift pal (is anyone actually not her friend?!) shared an Instagram snap on the tattoo chair with a chestpiece of a lion, appearing to be the late Cecil the Lion. The singer hasn’t *yet* confirmed whether or not the big cat tatt is indeed in honor of the slain feline, but with a caption like, “halfway and ouch,” we’re gonna guess he’s waiting to confirm those details once the ink job is totally completed. To keep the generous feels from the budding masterpiece going the singer also gave the talented tattoo artist a shoutout on Twitter. Is there anything better than #EdPromo?!

Regardless of whether or not Ed’s lion tattoo is inked in honor of Cecil, there have already been plenty of other tributes to the African lion. A Lion King animator completed a painting of him, the Empire State Building ran a projection show featuring endangered species including Cecil and even your fave ’90s toy company TY Inc is releasing a Cecil Beanie Baby. But, best of all, multiple airlines are banning the transportation of big game trophies. Long live, Cecil. <3

Which Cecil the Lion tribute has connected with you the most? Let us know in the comments.