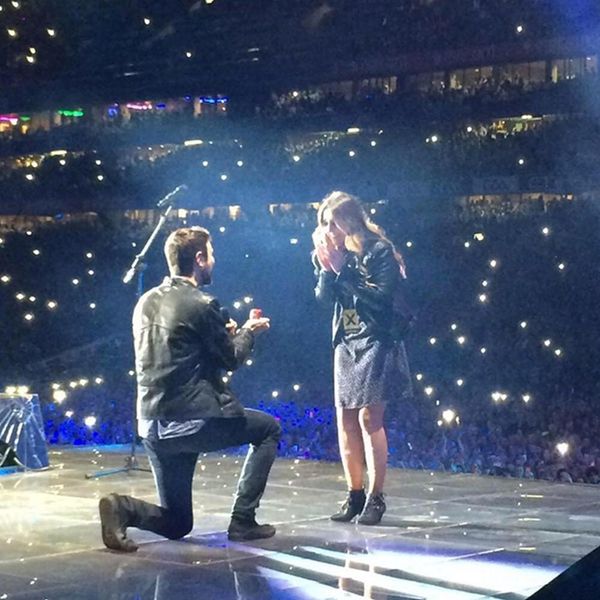 Is Ed Sheeran something of a relationship good luck charm? It’s really looking that way. The 24-year-old musician recently made the Internet swoon when word got out that he helped his friend Jake Roche (from the band Rixton) pop the question to his girlfriend Jesy Nelson (from the band Little Mix). And now, the nicest guy in the music industry is playing Cupid all over again.

During Sheeran’s show in Dublin on Saturday night he took a quick break from his set to bring his friend, Jay Boland up on stage. He told the audience, “Jay, from Kodaline, would love to say a few words.” Jay, who is the bassist of the Irish band then came on stage and asked his girlfriend Etaoin Corr to join him. He said, “I’m going to be really embarrassing and ruin someone’s life right now, but she’s been my best friend since we were about five years old.”

Once she made her way out on stage Jay told her, “I can’t imagine a day without you, will you marry me, Etaoin?” After a nod of approval he turned to the audience and said, “It worked!” There were a lot of congratulatory hugs and then Ed went on with his show. Later Sheeran tweeted, “Thank you to Kodaline and Glen Hansard for joining me on stage today to sing some tunes. And congratulations to Jay, what a way to propose!” Here’s to hoping he was thanked with more than KFC this time.

What’s your favorite recent celebrity proposal? Share with us in the comments below.