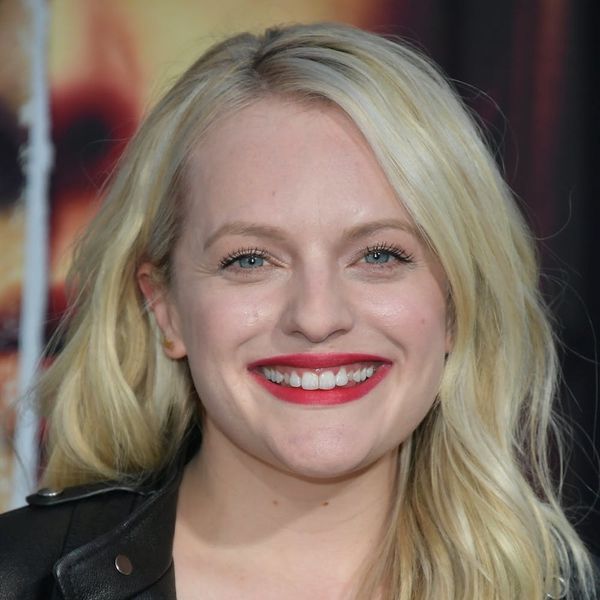 Elisabeth Moss is a blonde no more! The actress stepped out on the red carpet Thursday for a Beverly Hills event for her show, The Handmaid’s Tale, with a brand new coif color that had us doing a double take.

In place of the sunny platinum locks we’ve grown used to seeing her in as of late, or even the dishwater blonde we regularly see her sport as Offred/June on the Hulu original, the 35-year-old showed off a coppery red shade that bordered on strawberry blonde.

From the looks of her Instagram account, the change was likely for an upcoming flick she’s currently filming called The Kitchen, about a group of New York gang wives living in Hell’s Kitchen in the 1970s.

According to The Hollywood Reporter, her character, whose name has yet to be revealed, will be the “timid wife of an abusive husband who falls in love with the violence of her new life.” Tiffany Haddish and Melissa McCarthy will also star in the film.

Then again, she could just be getting a jump start on the next big thing in hair color: As you’ll recall, the copper hue is one Kim Kardashian West’s stylist, Chris Appleton, predicted would be big for the coming seasons. “Going into fall, we’re going to see a big return of vibrant red and coppers,” he told Allure.

What do you think of Elisabeth’s new look? Weigh in over @BritandCo.

Nicole Briese
Nicole is the weekend editor for Brit + Co who loves bringing you all the latest buzz. When she's not busy typing away into the wee hours, you can usually find her canoodling with her fur babies, rooting around in a bookstore, or rocking out at a concert of some sort (Guns N' Roses forever!). Check out all her latest musings and past work at nicolebjean.com.
Celebrities
Hair
Celebrities Celebrity Hair Hair Color
More From Hair