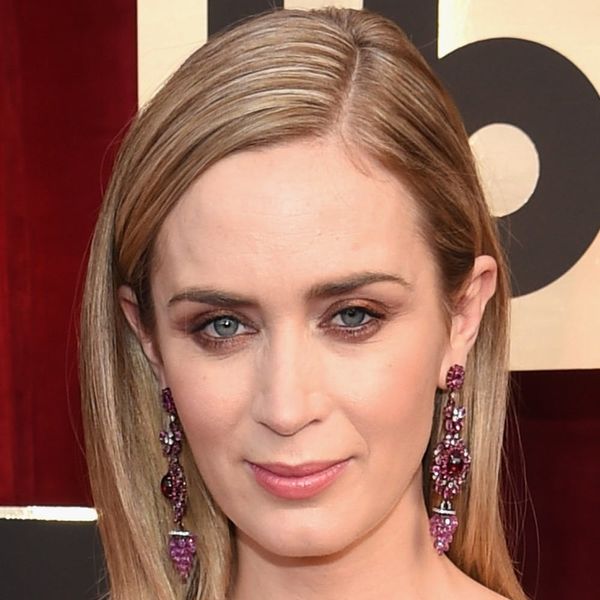 The first of Disney’s live-action movies, Beauty and the Beast, doesn’t hit theaters nationwide for another two weeks, but it’s already making major headlines. First, Emma Watson (AKA Belle) blew our collective minds when she reunited with several of her Harry Potter co-stars for the film’s LA premiere. Then, in more depressing news, an Alabama drive-in theater announced plans to ban the movie from its screens, citing Disney’s first openly gay character, Lefou, as the reason.

But back to the good Disney news: The House of Mouse’s OTHER live-action film, Mary Poppins Returns, is already underway, and the first pics of its lead, Emily Blunt, have us seriously excited.

Though we’ll have to wait quite a while for the actual film, as the 1964 sequel won’t be released until December 25, 2018 (boo!), Disney has offered us some consolation in the form of this snap of Blunt in full costume. With her long blue peacoat, cocked maroon hat, blue gloves, and multicolored satchel, we’ve gotta say: She’s “practically perfect in every way.”

Here is the first glimpse of Golden Globe® winner Emily Blunt as Mary Poppins in “Mary Poppins Returns,” the all new sequel to Disney’s 1964 film “Mary Poppins," opening in US theatres December 25, 2018.

She’s shown in profile, which means that we can’t see a whole lot of Blunt’s actual face, but it’s justtttt enough to have us giddy. Pair that with the fact that we can expect to see Hamilton’s Lin-Manuel Miranda opposite Blunt as a Bert-type named Jack and that the ACTUAL Bert, Dick Van Dyke, has also been confirmed to appear, and we’re absolutely over the moon.

The film will focus on a grown-up version of Michael and Jane (and their respective families) dealing with loss in a depression-era London. Enter Poppins (Blunt), swooping in to offer the metaphorical spoonful of sugar we all so desperately need RN.

We never thought we’d hear ourselves say this, but can we please fast-forward to Christmas 2018?

Which Disney remake are you most stoked for? Let us know over @BritandCo.