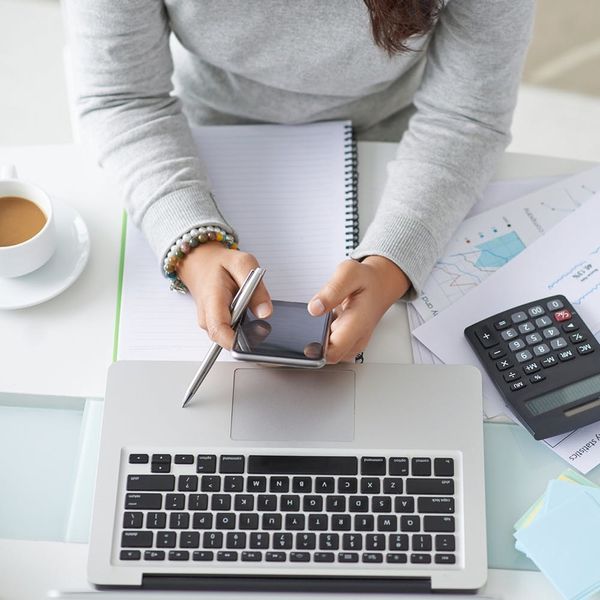 Ah, tax season. That dreaded time of year when you scramble to find YOUR crumpled-up receipts, hunt down people you haven’t talked to in months to gather obligatory paperwork from and hold your breath as you wait to find if you’ll be owing the government (wah!) or going on a shopping spree after this year’s returns are all said and done (come onnnnn, tax return!).

Go ahead and breathe. It doesn’t have to be this way! In fact, there are several steps that you can start taking right now to make the whole process easier on everyone — yourself included. Take it from Neil Johnson, aka “The Tax Dude,” a web expert on US tax planning and compliance. Here, he offers us several tricks of the trade for getting a jumpstart on good old Uncle Sam.

1. Don’t Rush: Neil’s first tip may seem counterintuitive (especially if you’re the type that likes to take care of business/get sh*t done), but the Tax Dude says filing too early actually results in the most common mistake he sees, which is missing information. “Sometimes there are situations where you [just] can’t file in January,” he says. “W-2s and 1099s are not technically due until the end of the month.” There are additional factors he points to, such as potential brokerage account extensions, W-2 corrections and missing forms (such as a K1 for inheritance recipients), which can contribute to erroneous returns and get you smacked with the dreaded CP2000 — a notice of proposed changes to your previously filed tax returns (which often involves paying back taxes). The bottom line? Don’t file until you are absolutely ready.

2. Choose Your Tax Expert Wisely: Quick and easy establishments such as H&R Block or do-it-yourself systems like TurboTax might seem especially attractive with their flash-in-the-pan promises of low rates and quick refunds, but Neil says you should pay very close attention to what you’re getting for your money. He points to H&R Block, which he says often “upsells on things called rapid refunds,” tacking on fees you might not even know you’re paying, as they can be automatically deducted from your return before you ever receive it. And while we usually support all things DIY, Neil says that it might not be the best way to go when dealing with the federal government. Just like any other skilled trade, Neil says taxes are an art form best left to the professionals. He likens preparing your own taxes to attempting construction with no prior experience. “If you put a jackhammer in my hands, I will make a mess of everything around me,” he says. But don’t just take our word for it. “I did an experiment a few years ago [where I offered to review] TurboTax prepared [tax] returns for $29.95,” he shares. “Every return I got was wrong.”

3. Get Organized: Now that you’ve gathered all your information and you’re ready to turn it over to your chosen expert, it’s time to get organized. “If you give me a shoebox of receipts, I have to look at them all and add them up. [But] I might make a professional call that’s… wrong for you,” he says. Not without good reason — “Only you know what you’ve spent those dollars on,” Neil says. “Give me totals. Give me a [finalized] list of what you’re spending.” That includes charity, which, when donated in smaller sums, Neil says is often overlooked. “Whenever you make a [charitable contribution] of a certain amount, [you] get some sort of acknowledgement,” he says. But it’s those smaller donations of $50 here, a $20 spot there, that people often forget to claim. “You’re not keeping track of them, or you don’t get a receipt,” Neil explains. Yes, that spring closet cleaning/Goodwill donation you made last summer counts — and every little bit helps!

4. Utilize Your Exemptions: If you’ve forever struggled between marking the “0” or the “1” as a single filee, Neil says to claim yourself and go for the “1.” While he says marking “0” will get you a bigger refund, he typically advises his clients to do the opposite. “From my point of view, why fund the government money [you don’t have to?]” he says. He’s got a point.

5. Do Your Research to Maximize Your Return: “I think one of the things that most people overlook is the ability to put money into their retirement plans,” Neil says. “When you have the ability to put money into your 401K, your employer may have a match for that — that’s an immediate return on your investment,” he says. Another helpful loophole Neil has discovered in his 28 years of prepping taxes? Tax-free IRA conversions. While Roth IRA accounts (special retirement accounts where you pay taxes on money being contributed) have minimum contribution thresholds for eligibility, Neil says you may be able to convert a traditional IRA account to a Roth IRA account “virtually tax-free.” He also suggests researching state deduction plans (he gives the 529 education plan in Illinois as an example) to see if you qualify for any additional subtractions.

Nicole Briese
Nicole is the weekend editor for Brit + Co who loves bringing you all the latest buzz. When she's not busy typing away into the wee hours, you can usually find her canoodling with her fur babies, rooting around in a bookstore, or rocking out at a concert of some sort (Guns N' Roses forever!). Check out all her latest musings and past work at nicolebjean.com.
money
Entertainment
money