WTF Is Facebook Yellow + Why We Need It Now 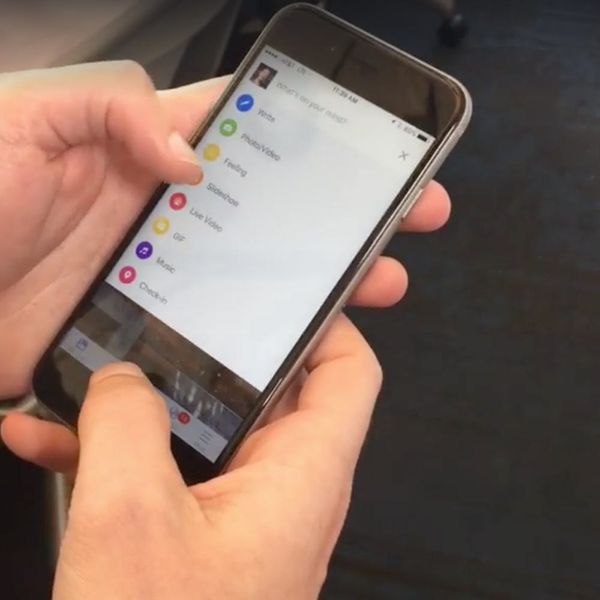 It’s no secret that the employees over at Facebook’s headquarters get a lot of company perks. They can work from a giant rooftop deck, wander to the on-campus ice-cream shop if their sweet tooth is acting up and, oh yeah, they also have a totally secret Facebook. In a recent live video, Mark Zuckerberg chatted about the social network’s newest feature (live video). While demoing how to do a live stream, he ended up showing off his “Facebook Yellow” version of the app and TBH, it was kind of mind-melting.

While he only kept his phone open for a brief minute, we noticed that the “What’s on your mind?” box looks totally different. Not only does it stick with you as you scroll through your feed, but once you tab on it, there’s a drop-down menu that boasted a slew of new features. Next to colorful icons you’ll see the standard option to write a thought or post a photo, but you’ll also see buttons that allow you to share a slideshow, music and a GIF (!!).

While GIFs are already available in the messenger app, they’re not yet something you can post as a status — and TBH, there are definitely days when a GIF is the only thing that can properly express how we’re currently feeling. And, as far as that music tab goes, rumors have been swirling since last year that Facebook’s building a music service. Could this be the final clue before the drop?

Live from Facebook HQ for the Live video launch!

Before you start diligently updating your app every day, you should know that some of these features may never make it to your phone. After sharing a sneak peek Mark told viewers, “This is kind of a pre-build, internal version of the Facebook app. You might have seen some stuff in there that we’re just playing around with and testing. Not everything there is going to launch. Some of it will over time.” Which “some of it,” Mark? We need to know!!

Cortney Clift
Cortney is the senior writer and special projects editor at Brit + Co. She typically covers topics related to women's issues, politics, and lifestyle. When she's not buried behind her computer you'll find her exploring New York City or planning her next big adventure.
Facebook
Tech
Facebook

How To Refresh Your Home Without Spending A Ton Of Money