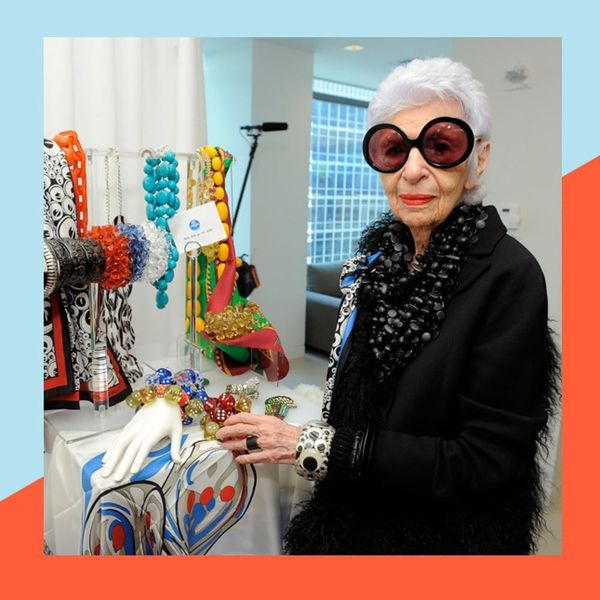 Part of what takes a fashionable person from trendsetter to household name is an instantly recognizable style. Think Kim Kardashian’s monochromatic looks, Victoria Beckham’s menswear-as-womenswear mission, Grace Jones’ sculpted shoulder blazers, and Sofia Vergara’s mermaid silhouettes. In an ever-changing industry, sometimes a little consistency is refreshing. Ahead, we take a look at a few of fashion’s heaviest hitters and the signature accessories that make up their trademark style.

No one is as revered for their choice of shady accessory quite like Anna Wintour. Whether she’s in the Vogue office, front row at runway shows, or snapped by paps on the street, Wintour is never spotted without a massive pair of Chanel sunglasses. Her go-to silo might be out of rotation but you can shop similar styles online.

The house of DVF was built on her perennial wrap dress, but look closely and you will see that Diane von Furstenberg is rarely without a set of statement bangles. Its no wonder why she teamed up with luxury jewelry label H.Stern for a collaboration of solid and sparkling bracelets fit for an icon.

To say Uncle Karl has a style uniform would be an understatement. Karl Lagerfeld doesn’t leave the house without a hodgepodge of strict accessories to complement his outfit. A black tie, flashy chain, and brooch or a pin of some sort attached to it are just the start of his OOTD. The Chanel and Fendi designer is partial to vintage Cartier clasps from the ’20s, but he doesn’t stop accessorizing there… no no, there are moto gloves, pinkie rings, his sunnies, Choupette (his cat) on one arm, and then his hair tie, of course.

Iris Apfel has made a name for herself thanks to her over-the-top persona, sage fashion advice, and eclectic wardrobe. From mixed prints to OTT details, fashion’s darling has always played it *unsafe.* Her most notable contribution to our lives, however, has been the slew of oversized necklaces that have become her hallmark. Though Apfel has reportedly scored her treasures over the years from shops all over the world, you can get your hands on similar styles via her Rara Avis by Iris Apfel collection for HSN.

You didn’t think we could include SJP and not bring up shoes, now did you? Just like her iconic character, Carrie Bradshaw, Sarah Jessica Parker is known for her sky-high heels — more specifically, her wide range of dazzling Manolo Blahnik stilettos. The actress-turned-fashion designer even created her very own shoe brand, the SJP Collection, in honor of her footwear obsession, that features satin, embellishments, and towering heights.

Diamonds are a girl’s best friend, but for Venezuelan fashion designer Carolina Herrera, it all comes down to the mega estate-level earrings. Between simple studs, long danglers, and large colorful teardrops most gals could only dream of rocking, Herrera’s number one love is always displayed on her lobes. Interestingly enough, she didn’t take inspiration from her vintage-era collection for her namesake line’s range of costume baubles.

As one of the most sought-after stylists working today, Rachel Zoe knows how to throw together a lewk. But there’s one very distinct item that completes all of her boho-chic ensembles — and that’s the slouchy or heavy hardware belt. Worn slightly off the hip (over a long, free-flowing dress, ideally), the multi-hyphenate pulls off effortless waist adornments better than the rest of us, favoring vintage Judith Leiber and Hermès for her cinching needs.