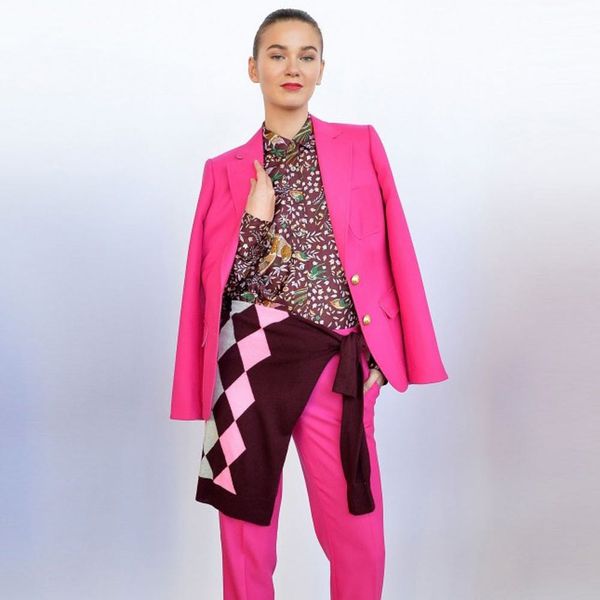 New York Fashion Week is all about getting a peek at the fresh new duds to see what you’ll be wearing this fall and winter, but there’s so much more to take away from the perfectly put-together outfits that grace the catwalk each season. Case-in-point: While the designs seen on the runway aren’t exactly wallet-friendly, impeccable style is 100% free. Yep, NYFW shows are full of style hacks that you should consider blue prints for endless of-the-moment inspiration on the cheap (aka: you can pull them off right now with garments you already own). Scroll on for 16 style lessons we’ve learned the catwalk this AW16 season.

Rock a Cuff on the

at Opening Ceremony: Long layers are a cold weather reality that can totally throw off your accessorizing game — rolling up sleeves to show off a little bling is so not happening. Opening Ceremony offered up the ultimate solution, slipping statement baubles like this slinky-inspired cuff on over sparkly knits and long sleeved tops. The simple move amplified the add-on’s eye-catching effect, while effortlessly solving a common winter style dilemma. (Photo via JP Yim/Getty)

Up until now, understated shades like black, white, camel, gray and pale pastels have been the go-to choice for monochromatic looks — they’re not only timeless, but they balance out the boldness of the one-color aesthetic too. Sies Marjan proved that high octane color is just as chic, sending out a handful of shockingly yellow and fiery orange ensembles. (Photo via John Lamparski/Getty)

3. Double Up on Duds at J.Crew: The basic turtleneck has totally transformed into the epitome of wintertime chic, finding itself in countless collections come fashion week. The latest way to rock the wardrobe essential? Under frilly feminine blouses and dresses, according to J.Crew. Beyond adding an extra layer of warmth, it adds dimension and visual intrigue to any outfit, especially when bold, contrasting color or funky prints are involved. Amp up the style factor by pairing the getup with equally as eye-catching outerwear. (Photo via Slaven Vlasic/Getty)

4. Make Understated Outerwear Pop at Altuzarra: If a statement coat just isn’t in the cards this season, create your own with a little help from the Altuzarra runway. Line a neutral colored coat with a statement cardigan in a vibrant hue for an unexpected pop of color. Textural elements like fringe and feathers are a must. (Photo via Neilson Barnard/Getty)

: Flirty frills aren’t going anywhere anytime soon, so don’t pack away those ruffled or bow neck blouses just yet. While spring 2016 is all about embracing your ultra femme side, fall and winter push the envelope on timeless style by balancing out elegant, feminine pieces with edgy modern elements, like bold belts and sleek, statement jewelry. (Photo via Fernanda Calfat/Getty)

6. Maximize Your Wardrobe at CG: Layering goes well beyond keeping you warm when the temps drop — it’ll help you make the most out of the daring dresses and occasion pieces hanging in your closet too. That chic strapless dress you wore to your bestie’s wedding? Not so anytime-appropriate, but layered over a cold-shoulder tee or contemporary blouse, it’ll take you from desk to dinner, no problem. Pair it with statement studs or a trend-right choker and you’re ready to hit the streets. (Photo via JP Yim/Getty)

7. Accessorize Like a Risk Taker at Dion Lee: Turtlenecks might seem like a no-accessorizing zone, but labels like Dion Lee are adding that tired sartorial notion to the long list of fashion rules you can officially discard. From sleek quicksilver chokers to long lariats, layering a necklace over your coziest winter top results in a look that reads ridiculously glamorous. (Photo via Ilya S. Savenok/Getty)

Metallics and Suede Are BFFs at Jill Stuart

Suede on its own is pretty solid, but when paired with metallics, like at Jill Stuart, it hits new sartorial heights. Silvery blouses and high shine steppers give the soft, supple fabric a glam disco era edge that feels so right now. Your new GNO look? We think yes. (Photo via Brian Ach/Getty)

9. Teach a Sweater New Tricks at J.Crew: J.Crew might be going back to their bread-and-butter basics, but the styling at their fall 2016 presentation felt more contemporary than classic with clever layering giving new life to closet essentials. Skirt/pant fusions have been big as of late, but instead of investing in a new piece, take a note out of Jenna Lyons’s style book and tie a sweater asymmetrically around your waist to create a skirts-over-pants look that’s surprisingly chic. Bonus points for mixing bright colors and graphic prints. (Photo by Slaven Vlasic/Getty Images)

10. Treat Leather Like a Layering Piece at Tome: Leather (faux or otherwise) is never one to take a sartorial backseat to anything in your closet. Pants, biker jackets, dresses, shirts, whatever — the material gives off major #girlboss vibes and refuses to be overtaken by basics and statement articles alike. Even when worn as a base piece — a game-changing move seen at Tome — it totally slays. Slip a leather-look top under an everyday button-down or ladylike frock for a fashion-forward twist on cold weather dressing. (Photo via Frazer Harrison/Getty)

White tights probably haven’t been a part of your wardrobe for more than a decade, but Custo Barcelona is making a pretty solid argument for a major comeback. The snow-colored stockings felt so right styled with sophisticated separates in neutral hues, chic sunnies and standout boots. (Photo by Fernanda Calfat/Getty

13. Go All-Out Sultry for Serious Sophistication at Tibi: Here’s a styling tip from Tibi that’s totally counterintuitive: Team two scandalous pieces, like a sheer lace top and a bare-it-all dress, for a desk to date night look that’s both sultry and classy. Complete the look with classic ankle boots and a copper eye. You’ll be wondering how you never thought of this before. (Photo by JP Yim

14. Double up on Details at Zimmermann: Donning a snuggly sweater isn’t the only way to achieve a chic high-neck look. Zimmermann challenged the turtleneck status quo by piling chokers high over flirty floral frocks to create a similar effect. Consider this the 2016 take on the arm party. (Photo by Fernando Leon/Getty

15. Put a Belt on It at Desugual: Belts aren’t the only accessory with transformative style powers — Desigual was just one of many labels that proved that an expertly styled scarf can inject new life into any outfit. Tucked into belts and draped across the body, bright fur stoles and sophisticated floral scarves brought an element of regalness and old world glamour to modern silhouettes and striking prints. (Photo by Frazer Harrison/Getty

16. Get Creative With Cutouts at Baja East: Do like Baja East and play with the negative space by layering colorful, lacy or textured tops under blouses or sweaters with cutouts for a decidedly modern and totally unexpected look. The move is practical in addition to being visually intriguing — it provides extra warmth when you need it the most. (Photo via Frazer Harrison/Getty)

Libby MacCarthy
Libby MacCarthy is an urban planner turned writer with a love (bordering on unhealthy obsession) of all things fashion and beauty related. She lives for perfectly brewed coffee, farmer's markets, dinner parties and perusing impeccably designed boutiques. When she's not on the hunt for the latest trends, you'll likely find her plotting her next adventure or nose deep in a book. Libby currently splits her time between the East Coast and her adopted home of France. Follow her daily adventures on Instagram.
NYFW
Style News
NYFW