18 Movies to Watch With Pops This Father’s Day 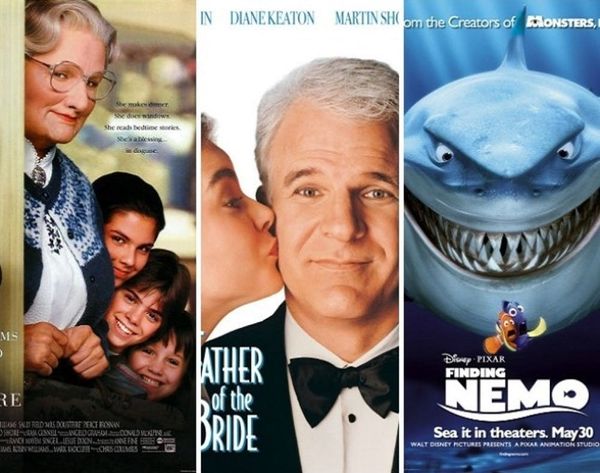 Father’s Day usually starts with a barbecue and ends with the whole family curled up on the couch watching a good movie. That’s just how it is. With the billions of Dad-centric movies out there, it might be hard for you to choose just one to watch. Not to worry. We have 20 of our favorite “tribute to Dad” movies to help you make that tough decision. Let’s go, Hollywood dads!

1. Mrs. Doubtfire (PG-13): You know the story: A father is so miserable about being separated from his kids that he is willing to dress up as an old woman everyday just to see them. That’s dedication, folks.

2. Father of the Bride (PG): Steve Martin is a comedic genius. That acting combined with a houseful of crazy wedding planning makes for a whole lotta laughs.

3. The Lion King (G): Mufasa is an awesome dad. But who’s the better caretaker? He or your pop? Just kidding, your dad will always win.

4. Three Men and a Baby (PG): This is perfect for those who want to hear a whole bunch of hilarious stories about how clueless your father was when you were growing up.

5. The Incredibles (PG): Your dad is basically as incredible as Mr. Incredible. This one’s for anyone who has little kiddos watching with you.

6. The Descendants (R): Get ready for a lot of laughs, a lot of tears and a whole lot of good acting.

7. The Pursuit of Happyness (PG-13): It’s the heart-wrenching tale of Christopher Gardner, an inventor and salesman who is forced to live on the streets with his son after losing his house and all of his money. Lots of tears, but on the plus side, Jayden Smith is an absolute cutie throughout the entire film.

8. The Sound of Music (G): While a lot of it does revolve around Maria, there’s definitely a huge focus on Georg Von Trapp and his transformation throughout the film. Get ready for the sing-a-long of the year, folks.

9. Delivery Man (PG-13): David Wozniak is a relatively irresponsible man who finds out he’s the father of 533 kids through anonymous donations he made to a fertility clinic 20 years ago. Vince Vaughn is perfect in this dramedy.

10. To Kill a Mockingbird (NR): Let’s be honest, we’re all constantly in awe of what a great father and all-around good guy Atticus Finch is. Seriously, what a great role model for Scout and Jem… just like your dad is to you.

11. Meet the Parents (PG-13): So the dad in this movie is super intimidating, but your dad’ll probably love him. Especially if he was the same way when you were first introducing your significant other to him.

12. Sleepless in Seattle (PG): Tom Hanks’ character and his son have the cutest relationship in this movie. Also, Tom Hanks and Meg Ryan are the dynamic duo of rom-coms, so this is a must-see for all.

13. Kramer vs. Kramer (PG): After getting divorced from his wife, workaholic Ted Kramer is faced with the tasks of taking care of the household as well as his young son Billy. After his wife resurfaces and wants Billy back, it’s up to him to fight for the custody of his son.

14. Finding Nemo (G): Even though it’s a kids movie, Finding Nemo has to be one of our favorites. We just can’t help but tear up every so often, whenever Marlin feels like the whole search is pointless.

15. Big Daddy (PG-13): After his girlfriend dumps him, the lazy law school graduate Sonny Koufax decides (almost on a whim) to adopt a five-year-old. Sound crazy? You’ve got it.

16. Mr. Mom (PG): After he’s laid off, Michael Keaton’s character stays at home while his wife rejoins the workforce. And he doesn’t have a clue what he’s doing.

17. We Bought a Zoo (PG): Yep, it’s the story of a man and his children who buy a zoo. But it’s a pretty gosh darn awesome movie (but what Matt Damon movie isn’t?).

18. Parenthood (PG-13): If you’re a fan of the TV show Parenthood, then you may want to watch the movie that inspired it all. As always, Steve Martin shines as an on-screen father.

Which movie would you add to this list? Tell us in the comments below!

Sonia Rao
Sonia is a determined, television-obsessed gal on a quest to find the best cinnamon waffles recipe out there. If she isn’t researching the latest fashion trends or avidly crafting, you can catch her curled up on the couch with a few (meaning a billion) cookies, watching the hilarious antics of Leslie Knope or Mindy Lahiri. Sonia loves writing for Brit + Co as much as she loves desserts, and is equally proud of her quirky, pop culture reference-filled Twitter feed.
Father's Day
Movies
Father's Day