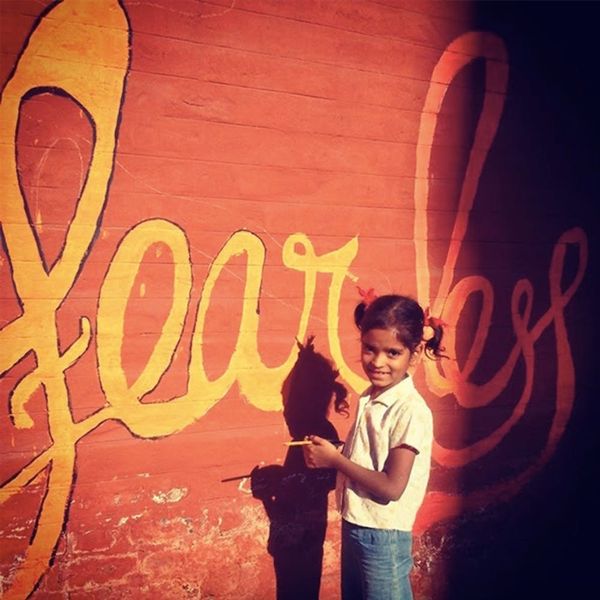 In 2012, the world learned some horrifying and heartbreaking realities about what it’s like to be a woman in India. And while it might be easy for us in the Western world to dwell on the supposed powerlessness of Indian women, it’s important to remember that there are so many who are standing up, fighting back and using their voice. Shilo Shiv Suleman is using art to do just that. She founded Fearless Collective, a group of women throughout the country using street art to reclaim public spaces where they’ve so often felt unsafe.

“I happened to be in Delhi at India Gate at the protests following the Delhi Gang Rape, following which I shared religiously every article that flooded the internet,” she writes. “And while these stories had to be shared, what it was also doing was making people more afraid than ever. This fear was absolutely counterproductive to the change India needs to see. We needed more women out on the streets, reclaiming their right to public spaces and equality.”

The Collective started as a poster campaign. Suleman put out a call for posters on the theme of being fearless as a woman in India and had an overwhelming 350 submissions, plus thousands of shares online. After the poster campaign’s success, they took their work to the streets, organizing “guerilla poster exhibitions” to gather even more support for their movement.

Next up, Suleman started painting walls in the streets of India with gorgeous images of fearless women and truly inspiring messages.

“I’ve painted walls with fisherwomen in Sion Koliwada in Bombay that were dealing with Police Brutality and fighting for their land. In urban spaces my walls dealt with this very urban conversation around the word ‘feminist,’ and in Hindu and religious epicenter Varanasi, my wall questioned the goddesses we worship as a culture, but rape in our homes,” she writes.

She’s since added workshops with women and girls throughout the country to the Collective to continue to inspire and empower generations to come.

Talk about the ultimate #girlboss.

Who’s the most badass international #girlboss you know? Tweet us about her @britandco!

Kylie Kendall
Kylie is a freelance writer living in Ottawa, Canada. When she's not writing, you might find her scoping out all-day breakfast spots in her city or taste-testing every bottle of red wine under $10.
Empowering Girls
Home News
Empowering Girls Feminism Girlboss