My First Real Apartment Gave Me an Identity Crisis 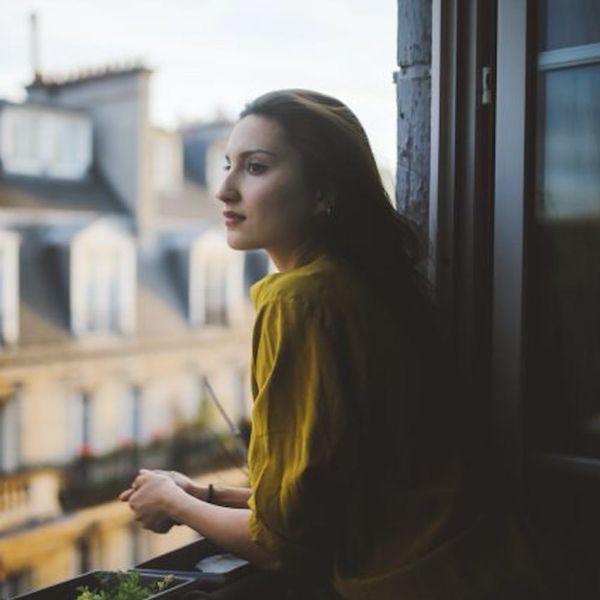 My New York obsession began in childhood, before I could even speak English. All it took was a giant monkey ascending a glowing skyscraper, in a movie theater in Leningrad. I bolted outside and had nightmares for weeks afterwards. But I returned later, to see the movie, King Kong, all the way through: not for the plot, but to be whisked away into the land of glass and steel, so different than the Soviet Union on the verge of collapse.

Glutting myself on the pirated and badly translated ’80s films, I became convinced that Manhattan teemed with big-haired, perfect-teethed men and women who spent their nights sashaying from one party to the next, drink in hand. In that version of New York, regular people would turn into heroes in a span of two hours. They’d smile like no Russian would ever permit himself to do in public, for fear of being beaten. They’d never stand in line for bread or yank earrings out of people’s earlobes in broad daylight. Even the floors in New York had built-in keyboards that played jazz when the likes of Tom Hanks walked upon them. It became imperative that I must inhabit that glimmering oasis, impervious to scarcity or sadness.

Since leaving Russia, I’d begrudgingly lived elsewhere, resenting those places for not being the one that mattered. And finally, recently single and with a new job, I had moved to Manhattan.

This was a tiny room, sandwiched in between four other bedrooms occupied by strangers, and so narrow it could barely fit a child-sized bed. But it couldn’t have been more perfect. Scraping the dirt off the fourth-floor window overlooking Broadway — the coveted Manhattan dirt — I resolved to make the most of the opportunity.

To manifest this intention into the universe, I decided to paint the room red, the color of passion and daring.

“How about a nice beige?” my mother suggested on the phone. “Isn’t red too stimulating?”

In retrospect, I didn’t know that extended exposure to red color is tied to lower IQ tests and analytical problem-solving skills. People depart rooms painted red quicker than the other spaces they enter; next to red color, test subjects also become more gregarious, hungry and thirsty. Bad decision making coupled with unfulfilled desires is often emblematic of New York burnout. But back then, I figured, the city could make all anxieties disappear, gurgling them out into a nondescript sewer or covering them by the softly falling leaves.

Soon, my new red walls incandesced in the sunlight. At night, shadows danced upon them and the scarlet deepened, surely foreshadowing something magnificent. Now, from the moment I opened my eyes in the morning to the time I flicked off the light switch, my pulse was in overdrive.

With the home ready and the blank slate of a lifestyle ahead, what would I become? An environmentally conscious bohemian who gigs around town or at least lugs an amplifier for someone who does? A socialite versed in the best rooftop bars with ambassadors of small yet important nations in her acquaintance? An academic working on a book on something uniquely New York, say “The role of the knish in Eastern European immigrant narrative of the early 20th century?” Unwilling to trust chance or time, I launched into self-fashioning.

Vegetarianism came first, mostly for financial reasons, as well as indoor gardening, as I planted and drenched tulips in water as a reminder to nurture my dreams.

“You overwatered them,” the salesgirl said back at the flower shop. She dug her thumb into the soil. “They’re rotting on ya down there.”

I bought new plants, the hardy kind, instead. A few slivers of green popped up, then died again.

“It’s the seeds, isn’t it?” I suggested back at the flower shop.

“Actually, now you under-watered them,” the flower shop girl said, crumbling the cakey soil inside. “Plants don’t like extremes. You know.” She emphasized that last part.

Whatever. As the next pursuit, I invested a week’s worth of wages in aromatherapy oils, vials, and yoga classes. At parties, I’d throw in words like chakra when it was and was not relevant. “You’re a vegetarian too? We have to hang out!” There was something chic about being a granola girl. About repurposing furniture. About homemade zit cream.

Yet weeks passed with no changes despite the rebranding efforts. My room smelled of latex, but only because of a burned essential oil flask. Nor was I meeting new friends or romantic prospects in yoga, like I envisioned it would happen. So I spoke louder, meditated faster, relaxed harder.

“Okay, you can do a headstand against the wall, big deal,” the red walls at home seemed to admonish. “But can you do a real headstand for like an hour and reach enlightenment faster than anyone on the Upper West Side? Didn’t think so. You’d have been better off as a lawyer, like your family hoped. Richer, too. Guess you just can’t pull the load of a flexible lawyer earth mother with a green thumb. What can you do? BOOOOO!!!”

Meanwhile, my roommates became alarmed at the stench of ylang ylang seeping from under my door. The whole aromatherapy thing, this granola thing, was nauseating.

Next, I decided to dabble in visual art. Since my drawing skills were limited to an outline of a horse’s torso, considered pretty realistic by peers back in sixth grade, art modeling seemed like a good idea.

I practiced what seemed like a sultry bat of the eyelashes coupled with Eastern European aloofness in front of the mirror. With the help of a couple of artist friends, I built a small portfolio, booked sessions and began traversing studio warehouses in Brooklyn and Queens (with a small pocket knife, just in case).

Soon, modeling invitations turned strange. Foot fetish clubs, makers of wall calendars with girls spraying each other out of a water hose, or amateurs looking to slather subjects in gold paint flooded my inbox. It was just a matter of time until the exposure got too much. This pastime had to end.

“Okay, fine,” the red walls conceded. “You ain’t got the chutzpah to inspire art. We knew it. Live alittle! Next!”

Good thing I was living in the city of romance, as evidenced by the movies I watched back in Russia about couples brushing snowflakes off each other’s hair on tops of skyscrapers.

Yet even after reading a book on healthy relationship patterns and resolving to meet someone new at least once a week, there was still nobody compelling enough for an Empire State Building rendezvous.

“A new date, eh? What’s this one do for a living?” my mother weighed in. “Another musician or have you graduated up to actors these days?”

She obviously couldn’t tell the difference between a musician and a DJ. “Actually, the one I met today is a businessman. He sells hot dogs at the Yankee Stadium, but only until his underground poker club takes off. Seriously, mother, do you want me to succeed?”

These discussions usually ended the same way: My aunt’s got a friend who’s got a very nice nephew who just bought a very nice condo in Silicon Valley across from that new Costco.

“That’s because he’s an engineer,” my mother would add. “And,” she’d clear her throat, “an adult. I sent her your picture, from a couple of years ago.”

The specter of an engineer ensconced inside a silent suburban home with a flat-screen TV from Costco in each of its four bedrooms would always do the trick. I’d vow to never leave this island and just try harder, scheduling two blind dates per week. Then three. To no avail.

Yet the red walls wouldn’t quiet down. To avoid their incessant petitions, I’d wander the city aimlessly, peering into the faces of strangers, inside the brightly lit cafes and subway cars, at my exhausted reflection in the train window. Despite every effort, the Manhattan exploit I’d envisioned remained insurmountable.

In the meantime, my actual successes slipped by unnoticed. The red walls of my imagination always wanted it bigger and brighter, with fancier clothes, a better paycheck, a racier love life and a cooler soundtrack. Instead of experiencing New York, I had developed a dysfunctional relationship with my walls.

Prior to leaving the city, I repainted the room back to white. Steadily, rhythmically, every new layer of the brush silenced the hollering underneath.

And just like that, the space turned quiet and calm. It was your average room, on an average Sunday morning in springtime. The white surface was warm from the sun. The M96 bus shuffled outside, letting off a group of giggling students. A Bangladeshi couple sold fruit on the corner. A man with a Bible shouted “Hallelujah!” across the street. Did I ever notice them, appreciate them? More than anything in the world, then, I wished there was a way to do it all over again, to live in New York in my own colors, on my own unscripted terms.

But the new tenant was already on her way. Pushing the last suitcase out, I hoped that her way would be kinder. That she wouldn’t look at things through the distorted lens of a Hollywood flick or wishful thinking. That she wouldn’t expect the floors to play jazz when she walked upon them. Then perhaps she’d find her bliss in the city where anything seemed possible, yet so little was necessary.