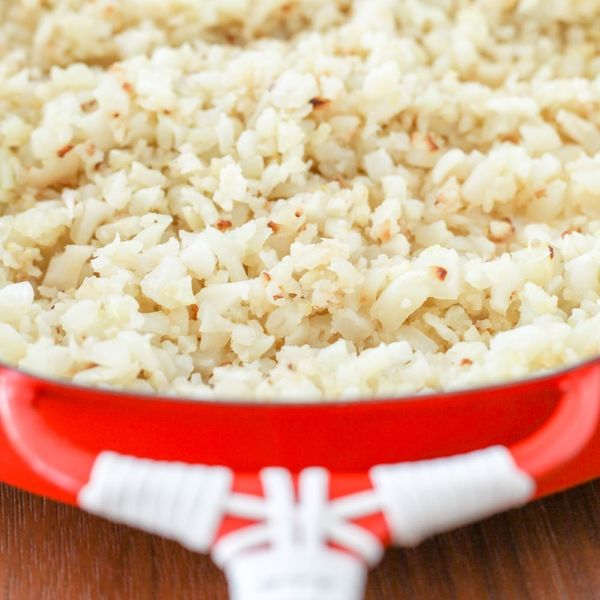 This is not going to be one of those articles where we tell you all of the things you’re doing wrong with cooking cauliflower rice, because — good news — it’s pretty darn hard to mess up. What we will address here are answers to the questions we initially had about this low-carb side, and everything we’ve learned while prepping, shopping for, and cooking a semi-ridiculous amount of it. Consider this your cauliflower rice FAQ.

Brit + Co: We could lie and say yes, but that would be a bit misleading. While cauliflower rice doesn’t taste like rice per se, it is an excellent substitute under most circumstances — in grain bowls, yes, for sushi, no — as it’s mild and plays well with other elements. Because it is not a grain, it won’t drink up saucy components quite as well as rice will. That said, it absolutely takes on the flavors of liquids when cooked with them, like in this cumin-cilantro-lime cauliflower rice recipe.

Q: Do you need a food processor to make cauliflower rice?

B+C: Nope, although it’s a faster, less-messy way to break it down. If you don’t have a food processor, simply cut the head of cauliflower in half and grate it on the largest holes of a box grater. (As far as equipment goes, we swear by this food processor and this grater.) When you get to a point where it’s too difficult to grate the cauliflower safely, finely chop the remainder. Alternatively, many grocery stores now stock pre-riced cauliflower (see below).

B+C: A resounding yes! Generally speaking, we steer clear of the pre-chopped fruits and vegetables section, as they’re typically both expensive and less-fresh than buying a piece of produce and prepping it ourselves. But we’re fully on board with pre-riced refrigerated or frozen cauliflower rice, as ricing it yourself can be a bit messy. If we plan to cook the cauliflower rice within about 48 hours of purchasing, we go with the former (refrigerated). If we won’t be cooking it until later in the week (or even months later), we purchase the latter (frozen), as the former tends to get a little soft and smelly after a few days in the fridge.

As for how to cook them, we treat refrigerated cauliflower rice exactly how we treat cauliflower that we’ve riced ourselves: Heat a tablespoon or two of cooking fat (we like avocado oil) in a large skillet over medium-high heat, add in the riced cauliflower (about 16 ounces), stirring it to coat in in the fat. Cover the skillet and cook it until it’s just-tender but not soft or mushy (five minutes or so). Sometimes, we’ll add in aromatics or even treat it like fried rice. We find that frozen cauliflower rice turns out best when prepared according to the instructions on its package, which vary a bit from brand to brand but generally employ either a steaming or boiling method.

Q: How do you store leftovers?

B+C: Cauliflower rice tastes best freshly cooked, so we usually just make the amount that will be consumed in one sitting. It is better than we imagined it would be when reheated, especially when paired with assertive flavors. Refrigerate leftovers in an airtight container, and brace yourself for a bit of a sulfur stink when you open the container. Either gently reheat leftovers in a saucepan or skillet on the stove or in a microwave-safe container. Refrigerated cooked cauliflower rice will stay fresh for two to three days.

Q: Can you freeze cauliflower rice?

B+C: Yes, you technically can, but we wouldn’t recommend going the DIY route here, as it’ll freeze into one hard block, rather than discrete pieces of cauliflower rice. Instead, if you’d like to keep a stash in your freezer, stock up on bags from the freezer aisle of your supermarket.

B+C: With about five grams of carbs and two grams of fiber, one cup of raw or cooked cauliflower rice has about three grams of net carbs, making it an excellent choice for those on low carb or Keto diets.