5 Things Nobody Informs You About Wasting Food 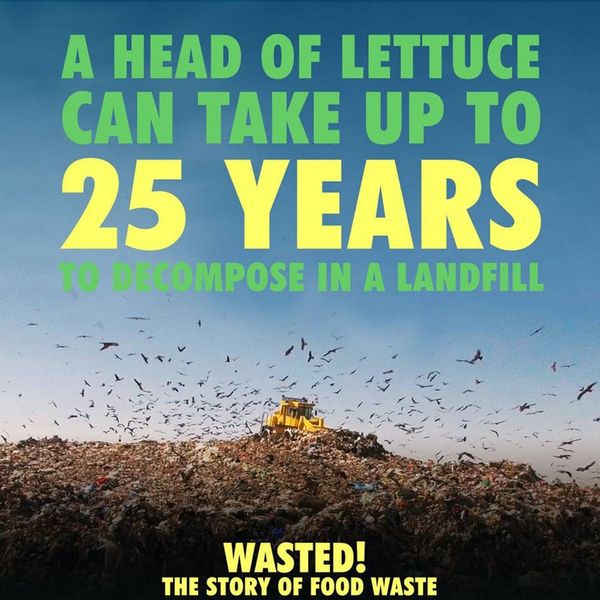 “If only we could get people to see the whole horrifying scope of the problem, I think people would be shocked,” Anthony Bourdain tells me, moments before the advanced screening of Wasted!, a food documentary he executive produced. Just as Food Inc. changed the way Americans view our food industry, Wasted! confronts what happens when we throw uneaten food in the trash. As to be expected, the impact may make your stomach churn. Despite the tough subject, Bourdain promises the film is “entertaining, non-didactic, [and] non-preachy” and “can show [the] problem areas where it is most egregious and some inspiring ways to mitigate it.”

The film, shot in 4D and directed by Anna Chai (Mind of a Chef) and Nari Kye (No Reservations), manages to make even the most graphic time-lapse shots of decomposing food look like a choreographed dance. Yes, hard-to-swallow statistics are presented throughout the film, but rather than leaving you feeling like a rotten human being, the film motivates viewers to take immediate action and offers digestible, memorable ways to do so. Here are some of the most startling facts the film presents and realistic ways you can diminish food waste moving forward:

1. Forty percent of food is wasted in America. Bourdain told me that the most shocking fact he discovered is “the sheer amount of food we throw out.” Forty percent of all the food made in America ends up in a landfill before it’s eaten. Worldwide, that number is still 30 percent. Living in a city, I spend roughly $400 a month on groceries, meaning I potentially waste about $1,920 a year on uneaten food. This number doesn’t even take into consideration what I spend at restaurants. Ouch. Calculate your food costs and determine for yourself what that dollar sign amounts to, as those big numbers could make you rethink your food purchases moving forward.

2. A head of lettuce takes 25 years to decompose in a landfill. WTF. Just when you thought throwing away plastic wrap was bad, this fact really puts things into perspective. Why does food take so long to decompose in a landfill? The simple reason is food, when covered in airtight plastic bags and surrounded by thousands of other plastic bags, has no access to oxygen, and therefore beneficial microorganisms and worms cannot break it down into soil.

3. Food waste creates methane gas. Carbon dioxide gets a bad rap for ruining the environment, but food waste, AKA the food rotting in a landfill, produces methane gas, which is 23 times more powerful than CO2. While there are plenty of ways to be more eco-conscious, like going vegetarian or riding a bike instead of driving, simply not throwing food in your garbage can have a lasting, beneficial impact on the environment.

4. The EPA created an Inverted Food Pyramid to help offset waste. According to the film, the world doesn’t need to produce more food to feed the hungry, it just needs to waste less. Though it seems like food waste is inevitable, the EPA developed a Food Recovery Hierarchy to help people find alternative locations (other than a landfill) for their uneaten food. The documentary goes through each of the preferred levels and provides specific examples of how each one applies. For instance, grocery stores and restaurants can donate uneaten, unsold food to food banks. However, if it’s not safe for human consumption, it can be fed to livestock, used to generate electricity, or composted.

5. You can make a difference. Your day-to-day actions can and do have a ripple effect. One way to get the message out about these facts is to host a screening of the film (it’s available on Amazon, iTunes, and Xfinity). The most obvious next step is to stop throwing out uneaten food. “Organize your shopping a little better. Plan for not only what you would cook for dinner but think of something you can do the next day with the leftovers,” Bourdain recommends. Start composting your food scraps. If your municipal system doesn’t support compost, there’s likely a nearby farmers’ market or community program that does — or you can start one! The moral of the story is there are countless ways to take action against food waste, and together, we can make a difference in reducing it globally.