For Millennial Women Like Me, Kate Spade Embodied the Freedom to Stand Out 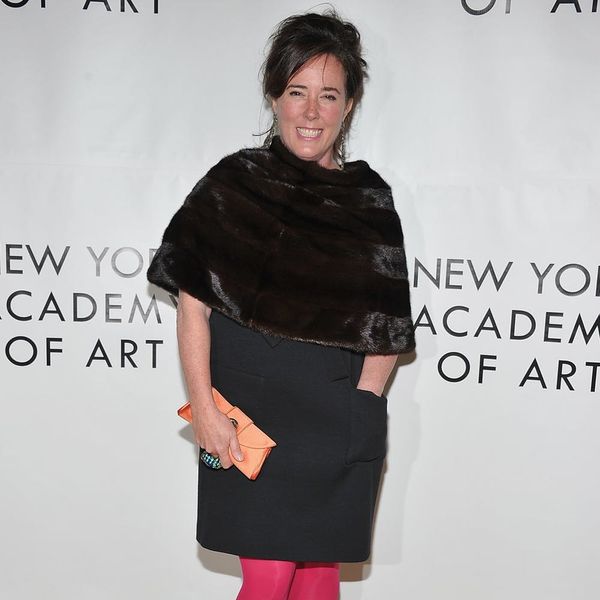 I first saw a Kate Spade purse when I was 12. I was flipping through the pages of a fashion magazine, and while I can’t remember if it was Vogue or Elle or Marie Claire, the bag left an indelible impression on my pubescent brain.

Unlike so many designer handbags I saw in the “glossies” my mom purchased for me when we took car trips, this Kate Spade bag wasn’t stodgy or boring. It wasn’t a traditionally elegant leather purse made in a neutral color. It wasn’t designed to match my shoes or blend in with my outfit. This accessory was a game changer: It was beautiful, playful, whimsical. It had been made to stand out, not to fit in. It was cheerful, bold, and fabulous in a way I hadn’t known fashion could be. It was pink.

That first time I clapped eyes on a Kate Spade bag was the moment I fell in love with fashion. Suddenly, I realized personal style could be fun and creative. It didn’t have to be understated, like a classic black Chanel bag. It could be colorful and amusing, like wearing cotton candy on your arm.

I spent the next decade lusting after Spade’s brightly colored totes and pocketbooks. My friends and I giddily pointed out her pieces whenever we saw well-dressed adult ladies wearing them at the mall. When we were feeling extra-brave, we’d wander into fancy department stores and check the prices of her newest line. We prayed, by some miracle, at least one of them would be on sale for $39.99.

My high school friends and I perceived Spade’s bags as the ultimate in aspirational accessories. I daydreamed about the day when I’d finally have my own money from working a yet unclear (but highly lucrative) job. That’s when I would march confidently into Holt Renfrew (Canada’s version of Barney’s) and buy a Kate Spade tote on my imaginary credit card.

Around the age of 20, my imaginary credit card became real, and I actually did purchase my first Kate Spade. I paid for it with the inaugural paycheck from a summer job. The job involved lots of monotonous photocopying, but my purse was worth it. In the words of Gollum from The Lord of the Rings, it was “my precious.”

My OG Kate Spade bag was decorated with a pink and green floral print, which my father referred to as “loud.” But I didn’t care. On more than one occasion, other women walked across a crowded bar to tell me how much they admired my new bag. That accessory felt like a superpower. It gave me the power of visibility. Its vivid print made it impossible for me to disappear, even in a crowd. Sadly, two years later, I misplaced my “Superpower Purse” while moving out of my first apartment. I got teary-eyed when I realized what had happened. It may sound materialistic, but I still miss that first Kate Spade purse.

While other fashion obsessions have come and gone (I no longer wear Blair Waldorf-style headbands and fascinators), my love of Kate Spade continued. Even today, I go on pilgrimages to outlet malls to find affordable Kate Spade luggage or evening bags. When I got engaged in 2015, I bought a bunch of turquoise Kate Spade crossbody bags as thank-you gifts to my bridesmaids; when we eventually canceled our wedding, I gave my friends the bags anyway, as thanks for being there for me during that breakup.

In my mind, Spade’s purses will always represent an unapologetic form of femininity. Her designs reclaimed traditionally feminine colors like pinks and pastels and transformed them into powerful fashion statements. They were luxury accessories that announced to the world, “I refuse NOT to let you see me. I’m so self-confident I’ll wear a purse that clashes with my pumps!” Buying a Kate Spade bag was a particularly conspicuous form of conspicuous consumption. They’ve always been for women who refuse to blend in.

When I first heard of Kate Spade’s tragic suicide, my heart didn’t want to accept it. I was overcome by sadness for a woman I’d never known, but whose purses had contained the most intimate parts of my life. The insides of her purses have carried everything from my lipstick to condoms, from my checkbook to my favorite paperbacks. I never met Spade, and I don’t know much about her, but somehow, I feel like she knew me.

As I watched everyone from Chelsea Clinton to my friends from high school lament Spade’s passing with me on social media, I realized how much this woman meant for many millennial women. It took less than a decade after launching her eponymous handbag line in 1993 before Kate Spade was one of the most famous labels in the world. Kate Spade’s meteoric rise reads like a fashion fairytale. Except it was Spade who created her own success, not a fictional fairy godmother.

Kate Spade will be missed. Her designs encouraged millennial women to stand out.