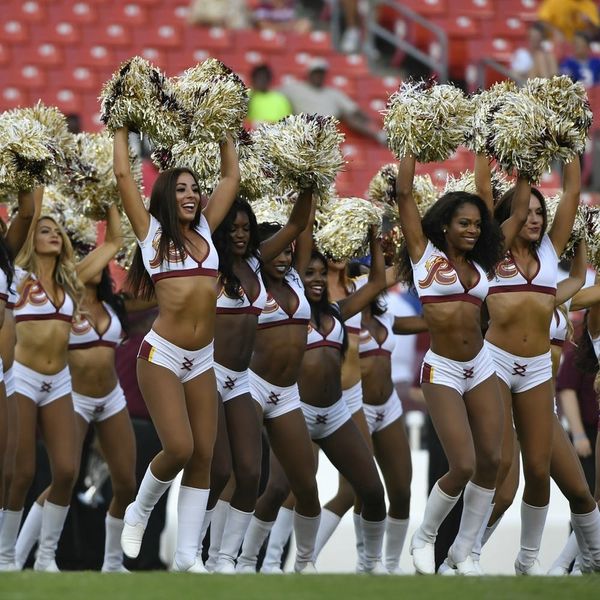 In a damning article in the New York Times on Wednesday, former cheerleaders with the Washington Redskins claimed that, during a trip to Costa Rica in 2013 to shoot an annual calendar, members of the cheer squad were forced to pose topless and act as escorts for guests of the team’s owners who had traveled with the group. Now, two former squad members say the account in the Times is not accurate and took their story to NBC’s Today show to clear up what they say is “just simply not true.”

According to the report in the Times, the 36 member cheer squad was flown to an exclusive, secluded, adults-only resort to shoot a 2014 calendar, but once the women arrived the story alleges, their passports were held by team management. While the shooting the calendar, the unnamed sources say that members of the cheer squad were forced to go topless, or pose only wearing intricate body paint — all while invited (male) guests of the club watched.

The five women who spoke to the Times also claim that after one particularly long day, nine women were held back by team management as flagged by the guests. They were allegedly told to get ready to go out with the team’s guests to act almost as if they were escorts for the night.

“It’s just simply not true,” former cheer captain Charo Bishop told Hoda Kotb and Savannah Guthrie on Friday, who stated that, counter to the Times report, nobody on the trip was expected to do anything they didn’t want to.

“All optional. Voluntarily. Some girls were excited to do those things,” she said. “In terms of being an escort, that was never a perception I had. I think that being friendly and receptive and welcoming to sponsors is completely different than being an escort.”

While Bishop says she can’t speak on behalf of the other women, neither she nor former cheerleader Rachel Gill have ever felt pressured or forced to do anything untoward with anyone involved in the Redskins organization. Nor do they think that cheerleading culture is damaging to women at all.

“The culture behind our environment as cheerleaders, it’s such an empowering, and it’s a sisterhood, a bond” Gill said.

The Redskins organization has also spoken out against the accusations, saying they view their cheerleaders as the best representatives for the franchise in a statement released Thursday.

“The Redskins organization is very concerned by the allegations involving our cheerleaders in the recent New York Times article,” team President Bruce Allen said in a statement.

“We are immediately looking into this situation and want to express how serious we take these allegations. Based on the dialogue we’ve had with a number of current and former cheerleaders over the past 48 hours, we’ve heard very different firsthand accounts that directly contradict many of the details of the May 2 article. I can promise that once we have completed looking into this matter, if it is revealed that any of our employees acted inappropriately, those employees will face significant repercussions.”

Over the last year, a number of damning reports have come from current and former NFL cheerleaders including unfair working conditions, low salaries, and demoralizing team management.