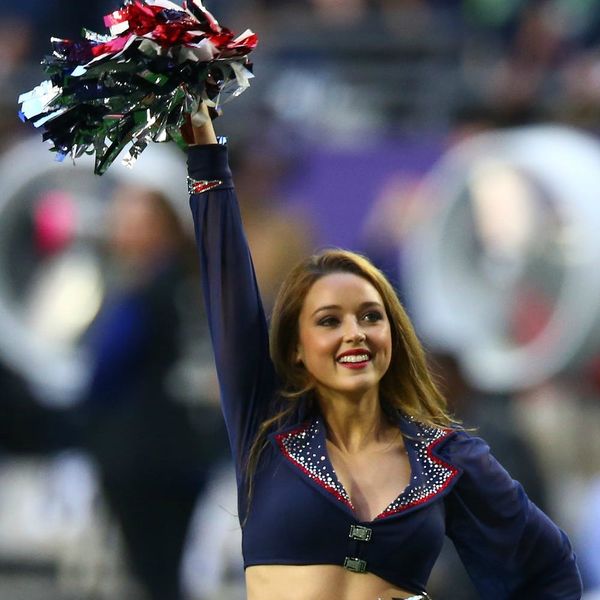 While everyone and their mother talks about the Philadelphia Eagles’ Super Bowl win, a legal battle in the NFL is getting the spotlight again: An ongoing court case between the NFL, the Buffalo Bills, and five former Bills cheerleaders, which concerns the huge pay gap between the women athletes performing on the sidelines and the men on the field.

While some may think cheerleading is an easy gig, the physical demands are huge and both on and off the field. The women who cheer must also abide by a strict code of ethics enforced by their team — and often, the cheer rules are stricter than the players’ rules.

A post shared by Eagles Cheerleaders (@eaglescheerleaders) on Feb 3, 2018 at 5:33pm PST

A requirement to maintain a specific body type, unpaid training sessions, and low salaries are just some of the complaints listed in lawsuits brought by NFL cheerleaders against their teams. And, in the case of the Buffalo Bills cheer squad, the Jills, the plaintiffs claim that they were degraded (including, according to one plaintiff, being told by male executives how to properly wash her private parts), demeaned (by being forced to provide a “jiggle test” for body fat), and harassed while making between $150 to $1,800 per season.

According to Bustle, the Jills squad has been disbanded since the five former dancers filed complaint in 2014, but at the time of their legal filing, the Bills team was worth an estimated $780 million dollars, bringing in close to $300 million in profit each year. The cheer squad saw almost none of it.

“If you were an independent business person working as an NFL cheerleader you were losing a lot of money,” Christopher Marlborough, an attorney representing the Jills, told Bustle.

Between unpaid labor at practices and games, mandatory public appearances (also unpaid), and the fact that the dancers had to pay out of pocket for their uniforms, gym memberships and mandatory salon visits, the cheer squad was always on the losing end. “Some of the cheerleaders made as little as $100 a year for hundreds of hours of work,” he said.

The Jills lawsuit isn’t the only one filed by former cheerleaders. A group of current and former cheerleaders for the Oakland Raiders sued the team and won a $1.25 million dollar settlement, guaranteeing that the Raiderettes make a guaranteed $9 per hour for all the work they do for the team. There have also been successful lawsuits in Cincinnati, New York, and Tampa Bay.

As for this year’s Super Bowl teams, they remain secretive about their cheer squads, refusing to release info on just how much (or how little) the women make. And with the teams set to rake in big bucks simply for reaching the final game of the season, it might be time they reevaluate the way they invest in their cheerleaders.

Have you ever been on a cheer squad? Let us know @BritandCo!