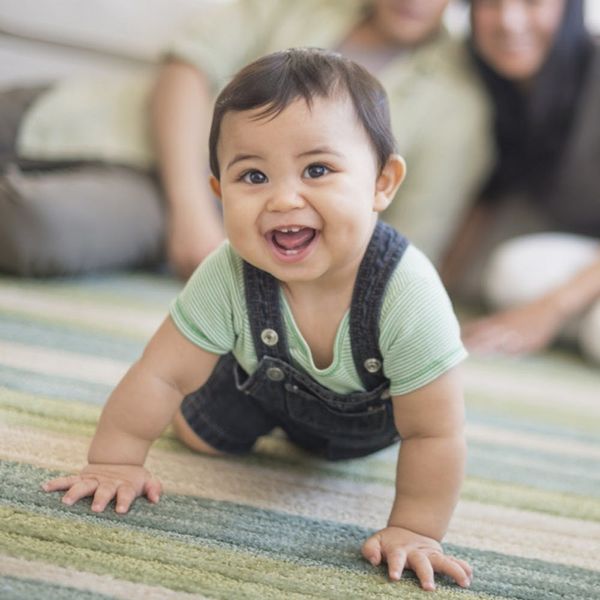 “Pink for girls, blue for boys” isn’t the only kind of gender stereotyping in kids’ clothing. Some mainstream clothing companies are sinking to new lows with sexist tees that don’t reflect girls’ and boys’ wide range of interests. (C’mon, pink isn’t just for girls, and trains and superheroes aren’t just for boys.) There’s some good news though: A few designers are breaking down stereotypes for the tiny set and creating gender-neutral threads both boys and girls will love to wear. Scroll on for the best (and the worst!) trends in kids’ clothing right now.

1. Science-Themed Threads: Mamas Jennifer Muhm and Malorie Catchpole created buddingSTEM, a science-themed clothing line for girls. When Muhm’s four-year-old daughter said she wanted to be an astronaut for Halloween, she could only find pics of boys wearing the costume. The little girl took note and decided to give up her astronaut dreams. So, Muhm and Catchpole (who had no luck finding the train-themed underwear that her daughter wanted) started their own kids’ clothing line, which celebrates girls and shuts down gender stereotypes. You won’t find any tiara-bedazzled shirts onesies in their line.

2. Gender-Neutral Clothing: Gender stereotyping doesn’t just happen to girls. When Handsome in Pink co-creator Helena Simon’s two-year-old son went through a pink phase, she couldn’t find traditional “boy clothes” in the color. So, she got together with her business partner Jo Hadley and created a gender-neutral clothing line for boys and girls. Boys can rock pink and purple shirts, while girls can express themselves with tees that have slogans such as “Forget Princess, Call Me President” and “I (Heart) Math.”

3. No Divisions: When is it ever okay to say that certain hobbies, objects, or living things are only for boys or girls? NEVER! Jessy & Jack’s kids’ line doesn’t believe in the random divisions of kids’ clothing. Their rad unisex tees totally break down stereotypes, and they’re cute to boot.

4. High Heels for Babies: Yep, you read that right. These soft shoes look like mini stilettos and come in a variety of colors and prints, including animal prints. Yikes! So, just in case someone isn’t sure if you’ve got a little diva or a little dude, these pint-sized pumps scream, “Girl!” Okay, dressing up your little one in itty-bitty high heels may not ruin her forever, but plenty of people are outraged over the way the pumps sexualize infants.

5. Wild Wording: If the general public doesn’t know that your little princess is just that, you can dress her up in a sequined, glittery onesie that screams it. The popularization of gendered wording on kids clothes was called out by one super-smart eight-year-old from the UK. When Daisy Edmonds made a video that showed how girls’ shirts tend to say “Beautiful” and “I Feel Fabulous” while boys’ tees say “Hero” and “Think Outside the Box,” the whole world took notice.

6. Wife-to-Bes: As if that wild wording wasn’t bad enough, some tees are taking it a step further. A couple years ago, a girls’ t-shirt with the words “Training to Be Batman’s Wife” caused all kinds of controversy for suggesting that a girl’s greatest achievement is getting married. Even though this tee isn’t made for young children (it’s sized for teens), it still hits a sexist new low. Your little girl is a kick-butt superhero all on her own, and no shirt should tell her otherwise.

What do you think about the gender differences in kid’s clothing? Tweet us @BritandCo!

Erica Loop
Erica Loop is a freelance writer living in Pittsburgh. When she's not busy creating kids' activities for her blog Mini Monets and Mommies, you can find her trying to hang out with her teenage son, being chased by her two Olde Boston Bulldogs or teaching a children's karate class (she's a third degree black belt!).
Gender
Parenting
Gender Halloween