This City Turned a Street into a Giant Slip ‘N Slide 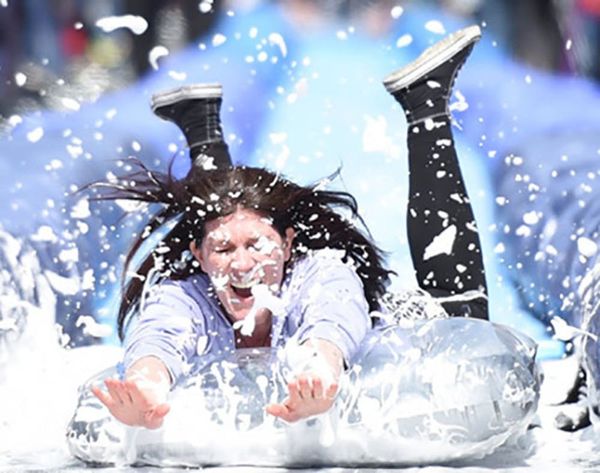 We’ve seen some hilly cities embrace super cool methods to help its commuters onward + upward, but the way one city in England is helping its residents downhill is creating a splash more epic than anything we could have ever imagined: They turned a sloped main street into a giant Slip ‘N Slide!!!!

The 300 foot water slide formerly known as Park Street was schemed up by artist Luke Jerram to show how public transportation can be both “practical and pleasurable.” Modestly put, Jerram. ‘Cause we’d call this playful pub trans the most freaking amazing fun time anyone could ever have. So duh, the idea to temporarily install the slide in the city center for one glorious day was enthusiastically backed by the Bristol City Council + over 500 eager-to-ride crowd funders.

The slide is a DIY of gigantic proportions, hacked together using plastic sheeting, hay bales and dish soap to make it nice and slippery.

So we totally take back what we said at the beginning. We definitely pitched this idea to our parents when we were 12. But unlike most of our brilliant tweenage ideas (like scarfing down pop + pizza, then going swimming), this one actually holds up as adults. And we’re not the only kids-at-heart who think so: more than 95,000 people applied for the 360 golden tickets to ride the slide, which cost about 10 Gs to temporarily install. Whenever Jerram’s ready for a round two on Kickstarter, we know a city (SF! SF!) that would definitely welcome the stunt with open arms.