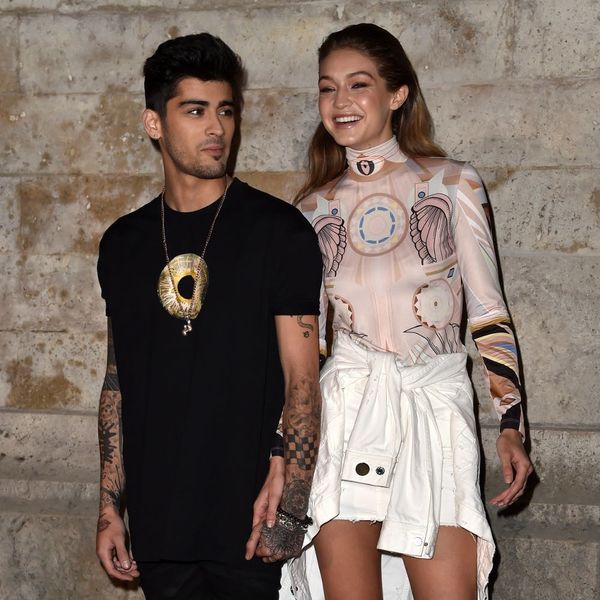 Gigi Hadid and Zayn Malik have been total #couplegoals since they made their relationship red carpet official (to nearly every celeb-loving fan’s delight) after she first wooed him with an awkward one-liner. We’ve spent the past year basking in their love, and now the stars are sharing more details about their relationship in Vogue.

“I shop in your closet all the time, don’t I?” 22-year-old Hadid asked 24-year-old Malik during a recent interview they did *together* for Vogue’s August issue. And the wardrobe raids go both ways.

@GigiHadid and @Zayn star on the cover of our August issue! Tap the link in our bio to read the full interview–and pick up your copy on @amazon. Photographed by @inezandvinoodh, styled by @tonnegood.

“Yeah, but same,” Malik replied to Hadid’s question, adding, “What was that [Anna Sui] T-shirt I borrowed the other day?… I like that shirt. And if it’s tight on me, so what? It doesn’t matter if it was made for a girl.” Hadid agreed, confirming, “Totally. It’s not about gender. It’s about, like, shapes. And what feels good on you that day. And anyway, it’s fun to experiment.”

They may be having fun, but readers weren’t so keen on Vogue using the term “gender fluid” to describe people occasionally swapping items of clothing. (As Ruby Rose explained in an interview with Elle, “Gender fluidity is not really feeling like you’re at one end of the spectrum or the other.”)

Zayn and Gigi are profiled in this piece on gender fluidity because… they borrow each other's clothes sometimes? https://t.co/ItswHOaBUd

"only ppl who are grounded in normative standards of beauty + gender can be gender fluid, which is 'experimenting' btw" – vogue, probably

But at least one person had a suggestion for how to address the situation:

straight cis couple shares clothes, Vogue declares them gender fluid. Teen Vogue is gonna have to clean this one up for Mama Vogue. pic.twitter.com/0VdVKadBbq

Vogue has since apologized for its choice of words with a statement to Fashionista that reads as follows: “The story was intended to highlight the impact the gender-fluid, non-binary communities have had on fashion and culture. We are very sorry the story did not correctly reflect that spirit — we missed the mark, we do look forward to continuing the conversation with greater sensitivity.”

What do you think of Gigi Hadid and Zayn Malik’s Vogue cover? Let us know @BritandCo.

Desiree O
Desirée O is a ‘Professional Bohemian’ who loves anything and everything related to the arts, entertainment, and pop culture. She ADORES being a ‘Newsy’ for Brit + Co, covering all of the latest tidbits of awesomeness that you want to read about. When she’s not writing, she’s either making messy art, going on long adventurous walks with her camera, or poking around over at bohemianizm (http://www.bohemianizm.com/). You can find out about Desirée O and her work at http://DesireeO.com/ or follow her on Twitter @DesireeO.
Controversy
Pop Culture
Controversy
More From Pop Culture