Gigi Hadid Is Now a Brunette 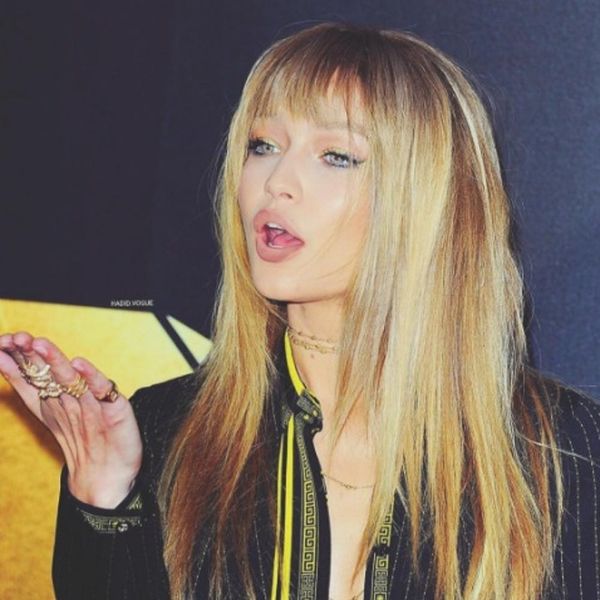 It looks like now that the big show is over, this year’s Victoria’s Secret models are shaking up their styles. Just yesterday, Karlie Kloss shocked us with her totally retro-‘70s hair and now Gigi Hadid has decided to say goodbye to her blonde mane in favor of a brunette shade. And though we’re totally into the seasonally appropriate darker shade, we usually associate brunette locks with her sister, Bella Hadid.

While there’s no doubt that the Hadid sisters are adorably close, their strikingly different looks allow them to work side-by-side in some of the biggest campaigns and events the biz has to offer. Their differences obviously include Gigi’s blonde hair and Bella’s dark brown hair. And while we’ve seen Bella try out platinum blonde, now Gigi has ditched her normally lighter shade.

16m kisses going out to you guys today! Your support keeps me goin. Thank you!!

Edging a tiny bit towards her sister’s color— seriously, it’s nowhere near as dark as Bella’s brunette locks — Gigi popped up in Manhattan yesterday with chestnut brown tones throughout with lighter tips at the ends.

Gigi out in Manhattan today #gigihadid

Gigi also just posted a pic showing herself as the new face of the Stuart Weitzman spring ’17 campaign with a slightly darker look than we’re used to.

Excited to be returning as the face of @stuartweitzman spring '17 with the one and only @mariotestino 📸♡♡♡!!! It was a fun one 👟🎧 #inourshoes #ad

Though it may just be temporary, we have to wonder how low, er, dark is she willing to go in 2017?

Desiree O
Desirée O is a ‘Professional Bohemian’ who loves anything and everything related to the arts, entertainment, and pop culture. She ADORES being a ‘Newsy’ for Brit + Co, covering all of the latest tidbits of awesomeness that you want to read about. When she’s not writing, she’s either making messy art, going on long adventurous walks with her camera, or poking around over at bohemianizm (http://www.bohemianizm.com/). You can find out about Desirée O and her work at http://DesireeO.com/ or follow her on Twitter @DesireeO.
Celebrity Hair
Celebrity News
Celebrity Hair
More From Celebrity News