Spice Up Your Life With 12 Ginger Beer Recipes 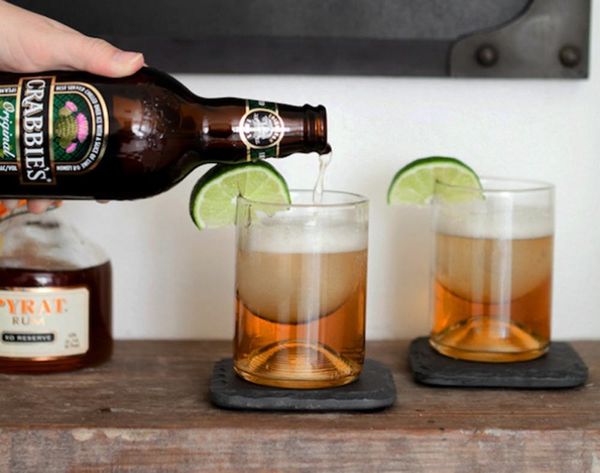 Ginger beer is ready to shed its rep as being merely an ingredient for ginger cocktails served in pretty copper mugs. Just like knobs of the fresh stuff, it can be used to whip up some tasty baked goods and braised dinners. Of course, we’re even sharing a way for you to tackle a little DIY fermentation project, so you can enjoy sipping on your very own home brew in just a few days. Check out these 12 ginger beer recipes with a spicy side… you’ll be glad you did!

1. Pimm’s Cup: Ginger beer adds a nice touch of spice to these Pimm’s cups. They’re all dressed up and ready to be taken on a picnic — it’d be a shame not to oblige. (via Brit + Co)

2. Homemade Ginger Beer: Attention all you fearless fermenters: Have fun making your very own ginger beer complete with naturally occurring fizz. You’re only about three days away from sipping on some tasty home brew. (via Lynsey Loves Food)

3. Ginger Beer, Coconut and Rum Sorbet: Cool off with a scoop of this ever-so-summery sorbet. (via Kitchen Konfidence)

4. Moscow Mule Jello Shots: Transform a classic ginger beer cocktail into Jello shots for your next party. They’re especially handy for the host since they allow you to mingle with guests instead of standing around mixing drink after drink. (via Domesticate Me)

5. Ginger Beer Bundt Cake: Ginger beer features heavily in both the batter and glaze for this gorgeous bundt cake. (via Spicy Ice Cream)

6. Braised Pork Shoulder With Apple Cider and Ginger Beer: What’s not to love about a succulent braise packed with warm, fall flavors and a ton of garlic? (via Bon Appétit)

7. El Diablo: This bubbly tequila and lime cocktail topped with ginger beer is sneakily strong. A spoonful of cassis adds an extra layer of flavor and provides its signature rouge hue that’s hard to resist. (via A Sage Amalgam)

8. Dark and Stormy: Enjoy these three-ingredient cocktails until daiquiri season rolls around again. They make stormy weather much easier to bear! (via The Effortless Chic)

10. Raspberry Sorbet and Ginger Beer Floats: A splash of ginger beer makes an already outstanding sorbet an even more sublime treat. (via Desserts for Breakfast)

11. Blueberry Lemon Ginger Fizz: Have fun changing up the berry or booze selection, tailoring the amount of mint to your tastes or generally just playing around with this refreshing recipe for a porch-ready sip. (via Brit + Co)

Have you ever mixed up a cocktail or cooked with ginger beer? Share your go-to recipe with us in the comments!

Heather Sage
Heather Sage is a gluten-free recipe developer and freelance writer living in Orlando by way of the Silicon Valley. When she isn’t playing around with alternative flours in the kitchen, she can be found tackling DIY projects around the house or exploring her neighborhood. Check out her gluten-free recipe blog, A Sage Amalgam.
recipe roundup
Recipes
recipe roundup
The Conversation
Reviews:
More From Recipes