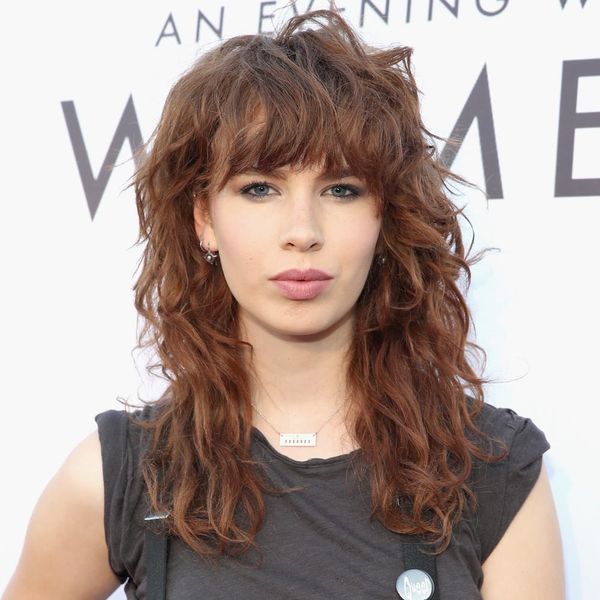 Grace Mitchell may not be a household name yet, but we have a sneaking suspicion that the 20-year-old musician being hailed as “the next Lorde” will be everywhere by the time the year is through.

Armed with a guitar, a wild mass of reddish-brown curls, and a set of pipes like you wouldn’t believe, the Portland beauty is every bit a star-in-the-making. She’s already conquered the fest scene, having played Coachella earlier this year and now Lollapalooza, where we caught up with her in between her performances (plural — she played an after-party Saturday night before hitting the Tito’s stage on Sunday and the Toyota Music tent later that same day).

Even more impressive? She accomplished it all before her full-length, debut album has even been released. Since introducing catchy-as-hell singles such as “NOLO” and “Now” that will have you singing them back long after they’ve ended, as well as edgier tunes like “Kids (Ain’t Alright),” she’s built quite a following — she’s up to nearly 10,000 followers on Instagram, with closer to 12,000 on Facebook.

Those numbers aren’t particularly surprising if you’ve ever seen her perform — Mitchell is a ball of energy, catapulting herself across the stage, curls flying. It’s clear that being a frontwoman comes naturally to the LA-based artist, a fact she confirms when she sits down to chat with us backstage. “Performing is my favorite,” she says. “I think going on tour is really surreal.” For the songwriter, who’s far more reserved in person than she is onstage, it means a chance to connect with her fans and see what they think of her upcoming album.

It’s a good thing, too, since she’ll likely be hitting the road following the release of her long-awaited LP, which she tells us will drop within the next six months to a year, featuring tracks like “Kids (Ain’t Alright),” a tune reportedly inspired by the effects of current political happenings on today’s youth. “If I’m inspired by the political climate, I’m gonna write about it,” she says.

There’s also her latest release, “Capital Letters,” which she says is about defiance, rebellion, and voicing your opinion.

“Hey! I know I’m making a big mistake, I wanna do it the hard way, I’m gonna say it in capital letters, capital letters… I’m gonna mess up deliberately because I’m fed up with common play,” she croons on the new track.

When it comes to her career, however, there’s not much she feels got messed up along the way, despite having gotten her start at such a young age. “I wouldn’t change anything,” she tells us. “I think it happened really fluidly.”

That’s not to say that her tastes haven’t changed as she’s grown into her own: Where she once cited the likes of Alanis Morissette, Tori Amos, and Lana del Rey as her main influences, she’s broadened her range to include such punk legends as Iggy & the Stooges and Patti Smith, giving her a bit more edge than the alt pop star she’s so frequently compared to. “I’m definitely not [the next Lorde], but I appreciate her style and her songwriting and her music,” she explains.

She’s also set herself apart on the style front. Mitchell stands out in a crowd, and not just because she’s model tall. In her sheer black top, ripped black jeans, and black leather jacket (which she says she wears everywhere, since it’s so versatile), girl practically radiates cool — not that we’d expect anything less after seeing the white pantsuit she donned sans shirt for her colorful “Now” video. “I would say comfortable is my style preference,” she shares. “I have a kimono in my closet that I really love.”

All the better to… play board games in? “I love chess,” she admits of her hidden talent. Check, mate!

Check out Grace’s latest single below!

What do you think of Grace’s tunes? Tell us over @BritandCo.