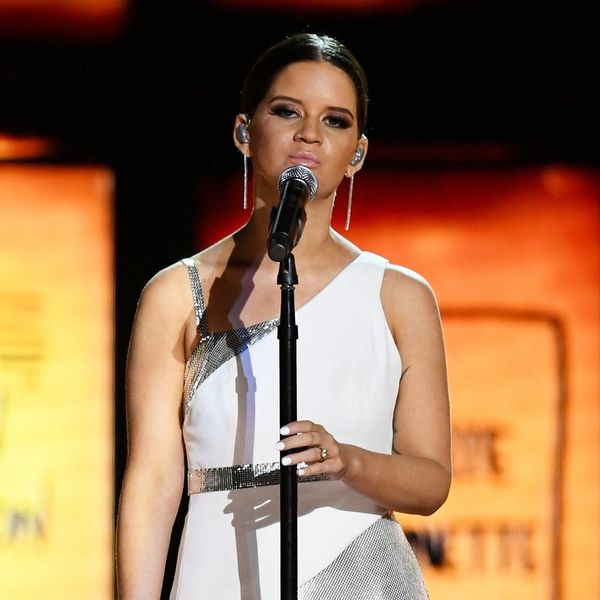 Awards shows typically dedicate their annual tributes to people in the industry who have passed away in the last year, but in light of October’s terrorist attack on the Las Vegas Route 91 country music festival, and the terrorist attack at the Ariana Grande concert in Manchester in June, the 2018 Grammys decided to do something a little different.

In addition to the usual In Memoriam segment, the show featured a tribute — led by Brothers Osborne, Eric Church, and Maren Morris, three performers at Route 91 — to the victims who were killed in those attacks. “Tonight to honor those we lost, Eric, Brothers Osborne, and I, who all performed in Las Vegas that tragic weekend, wanted to come together and honor the memory of the beautiful music-loving souls so cruelly taken from us,” Morris said at the top of the performance.

Together, the group performed Eric Clapton’s classic song of mourning and loss, “Tears In Heaven.” While they sang, the names of the victims of the Las Vegas terror attack were projected behind the singers. The Las Vegas shooting was the deadliest in modern US history, with 58 dead and over 500 people injured.

In a statement to Entertainment Tonight, Neil Portnow, president and CEO of the Recording Academy, said, “Live music events have always provided a safe space for fans to gather in a shared celebration of music. Sadly, that wasn’t always the case this past year.”

He added: “We believe it’s incredibly important to pay tribute to those who lost their lives in these senseless tragedies and to remind musicians and music lovers alike that live music will continue to be a powerful force that unites us all.”

“In many ways, our show encapsulates the year in music,” Ken Ehrlich, executive producer of the Grammy Awards, told ET. “Although that usually means a focus on achievement and excellence, sadly, last year was marred by a number of senseless tragedies that took place at live music events. We didn’t feel like we’d be doing our jobs if we didn’t reflect on these tremendous losses.”

What’s your favorite moment of the Grammys so far? Let us know @BritandCo.

Kat Armstrong
Kat has been a writer, social media maven and mom for longer than she's willing to admit. She's also spent time in front of and behind the camera, interviewing celebs, politicians and acting as a producer for fashion and artistic photography shoots. When she isn't writing for various orgs and publications, she's hanging with her kids, husband and French Bulldog, Peter, in Toronto, Canada.
Awards Shows
Music
Awards Shows Grammy Awards