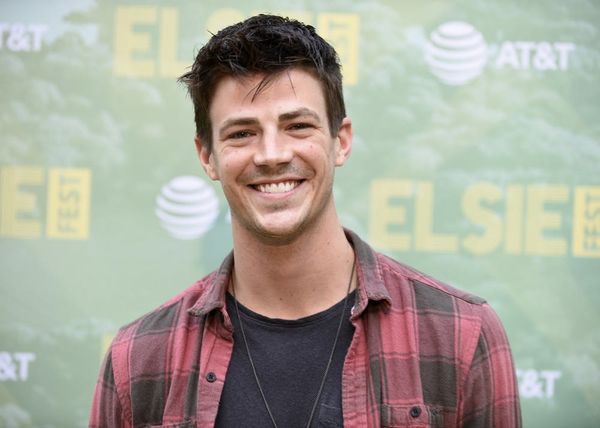 Grant Gustin is officially a married man! The star of the CW’s hit superhero show The Flash tied the knot with his girlfriend, Andrea “LA” Thoma, in a downtown Los Angeles ceremony this weekend, surrounded by their family and friends.

We went to see @kingjames last night. We love @kingjames. LA’s first time seeing Bron play up close since high-school and my first time seeing the King in person, period. (EDIT): * BUT GO @laclippers! (Even though we’re at a Lakers game. When you’re gifted Lakers floor seats, you don’t not go)

“What heartfelt joy is was to watch Grant and LA, surrounded by their family and friends, come together for a loving union,” Gustin’s manager, Robert Stein, shared on Instagram. “Wishing them both a lifetime of Love and Happiness. They are so blessed to have one another to spend the rest of their lives together.”

Stein shared what looked to be a photo booth pic with the newlyweds. Other guests, such as actor RJ Brown, also shared shots from the evening, and Gustin’s father, Thomas Gustin, posted several smiling snaps of his son and some of the wedding guests. “What a memorable and beautiful event!” he wrote of the celebration, which took place at the beautiful Valentine event space in Los Angeles.

Gustin and Thoma, a physical therapist, have been together since 2016, and revealed their engagement in an adorable Instagram post in April 2017. Gustin’s good friend, Leela Rothenberg, excitedly celebrated the news at the time, saying, “My heart is exploding!” Rothenberg was also at the wedding this weekend, posting her own black and white photo booth pics, as well as a series of vibrant Polaroid pics.

One year ago, fans speculated that the couple had tied the knot in a secret ceremony while vacationing in Malaysia, but Gustin cleared up the rumors himself. “While we did have a beautiful, symbolic Kadazan ceremony to honor LA’s ancestors, we still won’t tie the knot until next year,” he said.

Are you surprised to hear Grant Gustin and LA Thoma are married? Let us know @BritandCo!