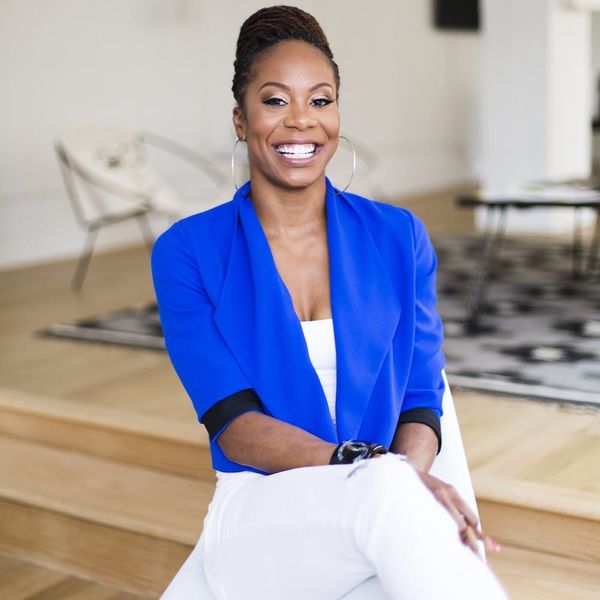 The public is always fascinated by what public figures like models, athletes and celebs eat — but it’s not every day that stars reveal exactly what their diet looks like. We know that Bella Hadid subsists on plenty of pizza, while Jennifer Aniston’s diet is rather… bland. And now, four-time Olympic gold medalist Sanya Richards-Ross sat down and told us exactly what she eats — and to be in tip-top physical shape, she really sticks to it.

Yep, first things first, if you want to be an Olympic-level athlete, you must drink lots of water. Okay, so that’s not really news to anyone, but it is crucial if you want to recover easily after a hard training sesh. “When I was young, I felt like I could do anything; my body recovered quickly, but as I got older, I had to start listening to my body… I had to really start focusing on my diet, drinking a lot of water, ” she tells us.

Oh yeah, and she eats plenty of grilled chicken and salmon. “Things like that to just be able to replenish the body and keep my muscles healthy and strong,” she says, and as a 400-meter-dash winner, she certainly needs to be strong. Aside from the obvious ways of getting her protein, Sanya also likes to supplement with protein shakes throughout the day.

And rather than walking around with an apple in her bag, she likes to “juice her fruits and vegetables to make sure [she] gets them in during the day.”

Despite what you’ve heard about runners “carb loading” before a big race, *surprise!* Sanya is NOT a fan of the practice. “I don’t really believe in carb loading,” she says with a half-smile, half-grimace. In fact, she abstains from most carbs during the week — especially bread (sorry, Oprah). “Sometimes the night before a track meet, I might have some pasta, but regularly during the week, I don’t really eat a lot of bread or carbs,” she explains. “I think I just feel lighter and faster when I eat my fruits and vegetables. I feel like the carbs sometimes weigh me down.” Then, she adds with a sheepish laugh, “Sorry to all my carb lovers!”

But if you reaaaaally can’t get by without that delicious starchy stuff, there is a light at the end of the tunnel, and that light is called cheat day. “I love to have some pizza on the weekends, ice cream, French fries, Skittles — my favorite candy,” she says with gusto. “I look forward to those days when I get to have something fun to eat.” But before you start loading up on the candy and snacks, Sanya warns, “I just think it’s important to do it in moderation, and that’s been my mantra throughout my career.”

But the most pressing question we all have is: What about the booze?! “Um,” she hesitates, “Yeah, you can definitely drink if you want to run, [but] like I said, in moderation. You don’t want to overdo anything, whether it’s drinking, fried foods, whatever it is.” Yikes, y’all hear that? Maybe it’s better to turn down that… er, fifth glass of rosé.

Her final words on how to eat for the Olympics? “Have fun, but just don’t overdo it!” And THAT is good advice.

Will you try out this diet? Tweet us @BritandCo!

Kimberly Wang
Kimberly Wang writes about all things pop culture, tech, style, and beauty. She's a Bay Area transplant and has an MFA in Creative Writing from Columbia University. On a sunny New York day, you can find her hanging out with her mini schnauzer Isabelle Jellybean on a blanket in Central Park.
Diet
Entertainment
Diet Fitness interview Olympics
More From Entertainment