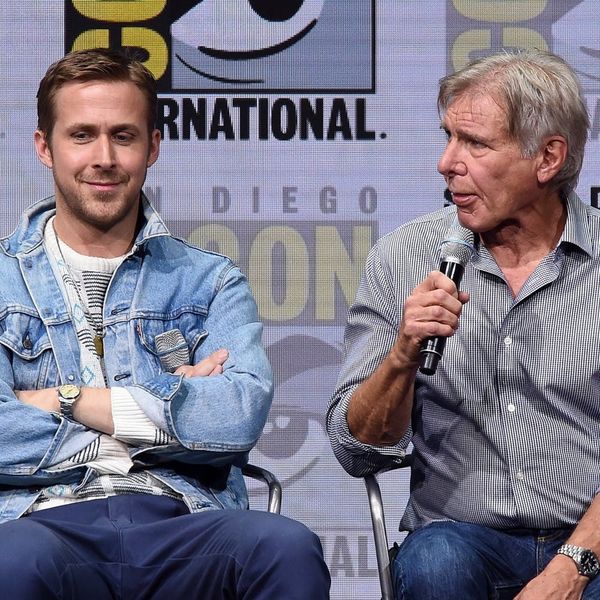 Who knew Ryan Gosling and Harrison Ford were the ultimate comedic duo?! The star of La La Land and the Indiana Jones actor have been making the media rounds to promote their latest flick, fantasy thriller Blade Runner 2049, and during an appearance on Britain’s The Graham Norton Show, they had us in stitches as the icon continually came up short when it came to remembering his young co-star’s name.

Talking about how he got involved in the project, the 75-year-old explained, “They finally came up with a good story and I thought it was awesome; I thought it was great. As I read it, I read about the character that umm, uh… Ryan.” Here he pauses to turn to the 36-year-old to ask, “Ryan?” as Gosling confirms with a quick, “Ryan.” With the crisis averted, Ford continued his story… only to be back at it again five seconds later.

“And with great enthusiasm, I called up the producers and I said this is great… what a great part; why don’t we see if we can get… um, uh…” “Ryan,” Gosling helpfully supplies. “Ryan!” he says triumphantly. “Ryan Gosling!”

A stunning vision of tomorrow. #BladeRunner2049

The hilarity didn’t end there, however, as Han Solo took his chance to get in one last teasing jab before the interview was up. “And I said, this is a great part for uh, Ryan Gosling,” he says before giving his co-star a pointed look of triumph.

This isn’t the first time the duo’s dry humor has had us laughing. While speaking with People last month, Ford revealed how he accidentally punched his co-star when “He walked into my fist. My hand was slightly injured, but I didn’t hold it against him.”

Here’s hoping these two get together to work on a comedy flick next!

Will you be watching Blade Runner 2049? Tweet us @BritandCo.