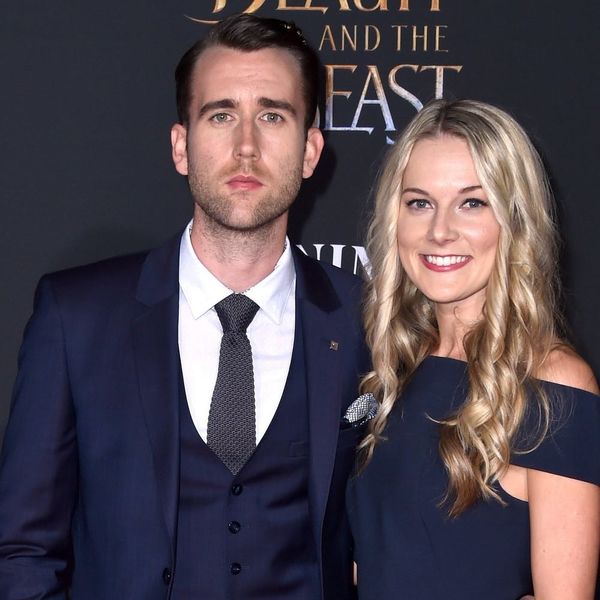 Harry Potter‘s Matthew Lewis is a married man! The actor — better known to fans as his character, Neville Longbottom — revealed today, May 28, that he recently tied the knot with Angela Jones.

The 28-year-old groom announced the happy news via social media, taking to both Instagram and Twitter to share a photo of the pair on their wedding day. In the image, Lewis smiles at his new wife as they stroll along a path lined with flowers and foliage. The actor looks dapper in a tux, while Jones stuns in a form-fitting gown with lace detailing and a delicate train.

On Instagram, Lewis captioned the photo with both a British flag and an American flag, representing the newlyweds’ home countries. And on Twitter, he joked, “Not only did I miss @ArcticMonkeys in LA but they were performing in Italy at the same time we were there and my wife made me get married instead. Fuming.” (The Arctic Monkeys performed in Rome on May 26 and 27, and in LA on May 5.)

The two reportedly met in January 2016 while Lewis was attending a Wizarding World event at Universal Studios in Orlando, Florida, where Jones works as an event planner. They then “got together in July and hit it off straight away,” the star’s rep told E! News. According to reports, the actor proposed to Jones in November of that year on a trip to Paris. “They’re both over the moon,” Lewis’ rep added.

Jones regularly pops up on her new husband’s social media accounts, where fans can see the two hanging out courtside at an Orlando Magic game, taking his parents on Universal’s new ride, or going backstage to meet one of Broadway’s leading men.

We don’t know if any of Lewis’ Harry Potter costars were invited to the wedding, but it looks like it was a magical day either way.